Author: Nathan Jones, DO and Neha Vapiwala, MD
Content Contributor: The Abramson Cancer Center of the University of Pennsylvania
Last Reviewed: May 14, 2008

The latest radiation therapy techniques for cancer treatment allow more precision than ever before. This can translate into fewer side effects and potentially better tumor control as the radiation beam is focused to treat the cancer while avoiding the normal organs as much as possible. Although radiation treatment is intended to be delivered with pinpoint precision, normal organ and patient motion, along with uncertainty regarding the exact location of the target, can all diminish the accuracy of the treatments. It has been clearly shown that normal organs naturally move during and between treatments. This is obvious in organs like the lungs that clearly move with breathing, but it also occurs in less obvious places, such as the prostate. This movement is impossible to predict exactly, so efforts are underway to monitor these movements and account for them, such that the radiation treatment is delivered more closely – if not exactly – to where it was intended.

The Calypso® 4D localization system is a state-of-the-art system to ensure that the radiation is precisely delivered to the target, in hopes of making the treatment both safer and more effective. It is often referred to as "GPS for the Body®", as it tracks the exact position and motion of the target prior to and during daily treatments.

While the Calypso System is being investigated for use in many parts of the body, it is currently U.S. FDA-approved only for use in treating prostate cancer. This approval was granted by the FDA July 28, 2006.

How does Calypso® work?

Three tiny Beacon® electromagnetic transponders are implanted into the target tissue, in this case, the prostate gland. This is a simple outpatient procedure very similar to a routine transrectal ultrasound-guided prostate biopsy. These transponders are inert, and NOT radioactive, meaning that there are no significant interactions with the normal tissue.

Later, at the time of the daily radiation treatments, the Beacon® transponders communicate with the Calypso System using safe radiofrequency waves. The Calypso System shows exactly where the target (prostate) is at all times so your doctor can make important and timely decisions about your care using real-time information during radiation therapy. 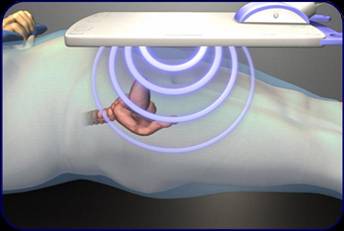 The Calypso System shows exactly where the target (prostate) is at all times so your doctor can make important and timely decisions about your care using real-time information during radiation therapy. 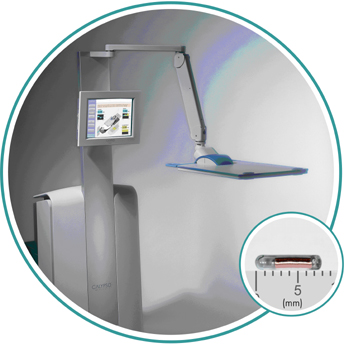 (See Above) A Calypso System monitor display allows the therapist to know the exact position of the prostate continuously throughout radiation treatment delivery. When the prostate is out of position (due to organ motion), the graph is color-coded to alert the radiation therapist during treatment. If the therapist sees the color yellow on the screen, as shown in this photo, the therapist is alerted to stop the radiation beam and reposition the patient. The yellow color means that the prostate has drifted (due to organ motion) out of tolerance, and that the beam is adjusted so that it is aiming at the target again. Exactly how much organ motion is considered within tolerance and how much is not is pre-defined by your physician.

What are possible side effects?

While the Calypso® system allows for the radiation treatment to be more focused on the prostate itself, the risk for side effects that are typically associated with radiation treatment still remains. It is believed that more precise targeting of the prostate will result in fewer short- and long-term side effects, with studies currently underway to assess if this is indeed true.

The Beacon® transponders are placed by needles inserted into the prostate, similar to a needle biopsy of the prostate. There are similar risks associated with this procedure, including pain, rectal bleeding, blood in the urine, and infection.

The Beacon® transponder is essentially a tiny metal coil encapsulated in glass. It is not radioactive. Other than when activated during a treatment, it is not emitting any signal. Since radiowaves are used, there is no additional x-ray exposure or ionizing radiation to the patient. There is typically no need to remove the transponders following the treatment, as they are not expected to cause any problems. They contain only very tiny amounts of metallic substance and should not interfere with metal detectors such as those used in airport security.

There is no known appreciable risk associated with the daily monitoring. The Beacon® transponders are not radioactive as they emit and are activated by radiofrequency waves.

The Beacon® transponders are visible on future imaging studies such as CT scans and MRI. They can result in a small amount of MRI artifact, or in other words, MRI may not be able to accurately visualize the area immediately near the transponders. You should talk with your doctor to decide if this is relevant for you.

What other techniques are used for localizing the prostate during external beam radiation therapy?

The standard method of localization for external beam radiation therapy to the prostate involves placing small skin tattoos on the patient and then using them daily to align the patient to lasers mounted in the treatment room. Regular x-ray imaging allows this positioning to be verified and adjusted as needed.

A limitation of this technique is that these images only verify the position of the patient’s bony skeleton. Soft tissues, such as the prostate, often move between treatments and are not visualized on these films.

Newer techniques, commonly referred to as image-guided radiation therapy (IGRT), are able to regularly monitor the prostate directly or indirectly. These include techniques using ultrasound imaging, implanted markers in the prostate that will be visible on x-ray (i.e. gold fiducials), and/or frequent CT scanning to re-image the prostate prior to radiation treatment delivery.

Unlike the gold fiducials and frequent CT scanning, the Calypso System does not expose the patient to any additional ionizing radiation, and the therapist can be present in the room throughout the positioning and verification. Additionally, unique to the Calypso® System, the position of the prostate can be monitored throughout the administration of the radiation in real time.

Where is it available?

Calypso System was first used commercially in January, 2007 at Swedish Medical Center in Seattle, WA. It is now available at leading cancer centers across the U.S.

Can it be used for other cancers besides prostate?

The initial FDA approval in July 2006 allows for the Calypso System to be used in the treatment of prostate cancer. Calypso® Medical hopes that this system will also be useful in treating tumors throughout the body, including breast, lung, abdominal, and head and neck cancers. However, at this time body sites other than prostate are classified as experimental use.

Brown Bag Chat: Prostate Cancer Treatment: Where are we now?