Estimates suggest that 2-5% of cancer patients have at least one episode of spinal cord compression (SCC) during the last 2 years of life. Rates vary drastically depending on the primary tumor type; the more likely a tumor is to metastasize to the bone, the higher the risk of SCC. One Canadian study found rates to be a mere 0.22% in pancreatic cancer, versus 7.91% in myeloma, a tumor known to cause bone destruction. Prostate, breast, and lung cancers account for the majority of SCC cases (about 15-20% each), with myeloma, non-Hodgkin's lymphoma, and renal cell cancers accounting for 5-10% each. Colorectal cancer, sarcoma, and cancer of unknown primary account for most of the remaining cases. Incidence decreases with age, peaking between 40-60 years of age. An estimated 7-14% of patients will experience a second episode of SCC. Although most SCC occurs in patients with a known cancer diagnosis, it is the initial manifestation of cancer in 8-20% of cases. Four to 5.5% of pediatric cancer patients will be diagnosed with SCC during the course of their illness. In children, the causes differ from adults, with neuroblastoma, Ewing 's sarcoma, Wilm's tumor, lymphoma, and other bone and soft tissue sarcomas causing the majority of cases.

Eighty-five to 95% of patients with SCC report new or worsening back pain, often accompanied by tenderness in the affected area. This pain is often aggravated by lying down, weight-bearing, coughing, sneezing or the Valsalva maneuver, and may be relieved by sitting. The location of the pain was found to correlate with the location of compression in only 16% of patients. Table 1 lists the common side effects experienced with SCC. The presence of any of these symptoms should be considered an emergency and be promptly evaluated. Early diagnosis and treatment is critical. Once paraplegia occurs, there is little chance of regaining function.

Spinal cord compression due to malignancy is defined as a compression of the thecal sac by tumor in the epidural space. This can occur by a few circumstances; vertebral metastases can directly invade the epidural space or cause bone destruction, with bone fragments leading to compression. Retroperitoneal tumors can grow through the intervertebral foramen, compressing the cord. In addition, cord injury can result from edema and ischemia caused by compression of blood flow to the cord. In children, masses are typically located between the vertebrae, impinging on the cord, rather than bone metastasis in the vertebrae.

Patients with compression in the cauda equina area present differently. The cauda equina is a bundle of nerves located at the bottom of the spinal cord, with nerves spreading out like a horse tail. Compression in this area results in loss of bowel and/or bladder function, loss of sensation in the buttocks, thighs and groin (saddle distribution). 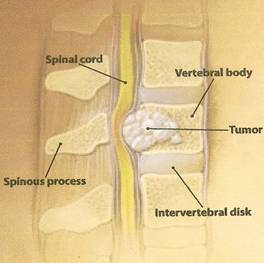 Patient education is critical to the early diagnosis and intervention of SCC. Patients with known bony metastases and those with high risk tumor types should be educated on the importance of reporting worsening or new back pain promptly, allowing the oncology team to evaluate further. One study found that patients who thought that their back pain could be related to their cancer experienced far shorter delays in treatment than those who thought the pain was unrelated to their cancer (5.5 days to treatment vs. 17 days).

Prevention can include bisphosphonates, despite a clear advantage in the prevention of SCC in clinical trials of those agents. In patients with bone metastases, radiation to known vertebral lesions can prevent the onset of SCC. Unfortunately, cancer patients who present to a community medical center or general practitioner with back pain may be treated according to a back pain algorithm used for non cancer patients, leading to delays in treatment. It is important for the oncology team to follow high risk patients closely and educate them on SCC symptoms to watch for and report.

Magnetic resonance imaging (MRI) is the gold standard for diagnosing SCC, with an overall accuracy of 95%. X-ray films have a high false-negative rate (17%), and vertebral metastases are only visible when 50% of bone is lost. An estimated 25% of patients with SCC have no bone destruction, making x-rays and bone scans unhelpful. Prior to the widespread use of MRI, CT scan with myelography was standard, and may be used in patients where MRI is contraindicated. MRI should include a scan of the entire thoracic and lumbosacral spine, since it is not uncommon to detect more than one area of compression. It is not necessary to scan the cervical spine unless symptoms are present in this area. Imaging can also assist in making decisions about the value of surgery, radiation therapy and other treatment options.

Seventy five to 100% of patients who are ambulatory before diagnosis of SCC remain ambulatory after therapy. Of patients who develop partial or full paralysis, only 15-30% are likely to regain useful function. In addition, the duration of symptoms prior to diagnosis are a sign of outcomes, with a slower development or longer duration of symptoms leading to better outcomes. Survival is dependent upon tumor type, number of metastases and functional status. Patients with radiosensitive tumors or treatments that respond well to therapy tend to have longer survival.

Despite these predictors, most patients have limited prognoses and would benefit from hospice or palliative care referrals. Nurses can play a key role in initiating hospice and social work referrals, working with patients to develop closure of personal relationships, financial affairs and making decisions related to resuscitation status.

High-dose corticosteroids are typically the first line therapy and in cases with a reasonable suspicion of SCC, corticosteroids (generally dexamethasone) are started prior to a radiologic diagnosis. Steroids can reduce peritumoral swelling, reduce pain and improve neurologic function. There is some controversy related to the dose required, with some institutions utilizing a bolus of 100mg followed by 6mg four times a day and others using 10mg every 6 hours. Several studies have shown no difference between the regimens in regards to response. Nurses should be aware of the possible dangerous side effects of high dose steroid use and watch for them (diabetes, adrenal insufficiency, susceptibility to infection, ulcer and psychosis).

Radiation oncology and neurosurgery should be consulted immediately to plan further treatment. The decision between surgery followed by radiation versus radiation alone is based on several factors, including radiosensitivity of the tumor, the expertise of surgical decompression available, prior radiation to the area, level of the compression and the rate of growth of the compression or decline in neurologic status.

Radiation is started emergently and typically includes 1 or 2 vertebrae above and below the site of compression. The most commonly used regimen is given over 10 fractions, although this period varies based on patient factors. A review of the literature found no difference in the various regimens typically used with regard to post-therapy ambulatory status or pain relief. Patients may experience myelosuppression, particularly if multiple ports are treated. Radiosurgery is being investigated as an option for treatment of SCC, but has yet to become a standard practice.

The longer a patient survives after SCC, the more likely they are to have another episode. Fifty percent of patients who survived 2 years had a second episode, while almost all patients who survived 3 years had a second episode. Radiation oncology should be consulted for a second episode because repeat radiation may be an option. In the case of widely metastatic disease, radiotherapy to SCC lesions is considered palliative, but allows for great improvements in quality of life for patients and their caregivers. In limited systemic disease, these interventions may be curative.

Patients who should be considered for surgery are those who can tolerate the surgery, have an unstable spine or bony fragments in the spine, a radioresistant tumor, solitary metastases (as in plasmacytoma) or an inability to receive more radiation therapy. Surgery is usually followed by radiation therapy.

Traditionally, laminectomy with a posterior approach was used, but this can lead to spinal instability and incomplete removal of the tumor in the majority of patients, whose tumors are located anteriorly. Anterior decompression allows for complete removal of the tumor and reconstruction of the damaged vertebrae. This is a more complex and technically challenging surgery, but leads to better results. Patients with tumors at L3 or more distal are still treated with the posterior approach. Radiation therapy can then be started 7 days after the surgery. Studies have found complications from surgery to be more common in patients over 65, those who had previously had radiation, and those who were paraplegic prior to surgery. Complications can include poor wound healing, infection, hemorrhage, stabilization failure, respiratory failure and intraabdominal complications.

Although several studies did not show a benefit to surgery followed by radiation, these had been done with the older, posterior laminectomy procedure. The report of a randomized trial in 2005 has finally proven the case for surgery (using the anterior approach) with radiotherapy in appropriate patients. The study, conducted at 7 institutions within the U.S., included 101 patients and was closed during an interim analysis due to the positive results in the combination arm. The following comparisons were made between the groups; retained the ability to walk: 84% Surgery + Radiation (S+R) vs. 57% Radiation alone (R) (p<0.001), median time able to walk: 122 days S+R vs. 13 days R (p<0.003), median time they maintained continence: 156 days S+R vs. 17 days R (p<0.016). Of the 32 patients unable to walk at randomization, 62% (10/16) in the surgery group versus 19% (3/16) in the radiation alone group regained the ability to walk (p<0.012). The surgery group survived longer, with a median of 126 days versus 100 days for the radiation alone group (p<0.033). The surgery group used less morphine and corticosteroids, did not remain in the hospital any longer, and the 30 day morbidity was actually greater in the radiation alone arm (mainly due to paralysis and immobility issues). These results clearly demonstrate greater quality of life and survival for patients receiving surgery followed by radiation. It is important to remember; patients eligible for this study had only single sites of compression, were considered candidates for surgery, and were not paraplegic for more than 48 hours prior to surgery. This surgery is performed emergently to achieve the best results, which can put a strain operating room function and staff, particularly in a smaller institution. Despite the limitations of population selection, surgery now plays a bigger role in the management of SCC.

The key to treating or preventing spinal cord compression and retaining quality of life is early intervention. Nurses, both inpatient and outpatient based, play an important role in early recognition of symptoms, patient and family education and coordination of appropriate referrals. Knowing who is at highest risk and educating these patients of the importance of what may seem like minor symptoms is a major step in early intervention. In the outpatient setting, nurses may need to triage symptoms over the phone, requiring knowledge of symptoms, risk factors and what questions to ask. Many nurses take responsibility for coordinating referrals for imaging studies and coordinate consultation with radiation oncologists and neurosurgeons. Time is critical to positive outcomes and nurses can often expedite this process, helping patients and families understand what is going on along the way. As we tirelessly advocate for our patients, know that astute nursing care can help these patients maintain dignity and quality of life.