What is the anus? 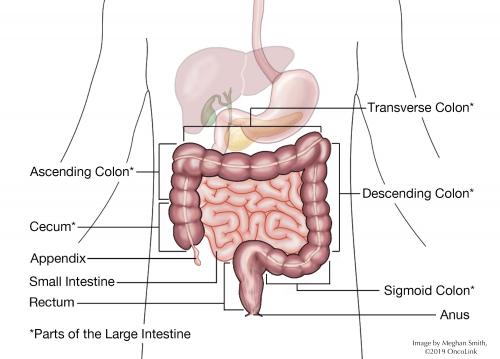 Once a diagnosis of anal cancer is made, additional tests will be ordered to determine the extent of the disease. A CT (CAT) scan or MRI can of the abdomen and pelvis should be performed to look for abnormally enlarged lymph nodes, which can result from spread of the cancer. The CT/MRI can also examine the liver for metastatic disease. A PET/CT may also be performed. This test can assess the extent of disease including the lymph nodes, as well as detect distant metastases. In some cases, an ultrasound of the tumor using a probe that is inserted into the anus can be used to determine the amount of invasion of the tumor into the surrounding tissues. Women with advanced tumors should also have a pelvic exam to assess if the tumor has invaded into the vagina.

Anal cancer is most commonly staged using the “TNM system.” The TNM system is used to describe many types of cancers. It has three components: T-describing the extent of the "primary" tumor (the tumor in the anus itself); N-describing if there is cancer in the lymph nodes; M-describing the spread to other organs (metastases). The staging system is very complex. The entire staging system is outlined at the end of this article. Though complicated, the staging system helps healthcare providers determine the extent of the cancer, and in turn, make treatment decisions for a patient's cancer. The stage of cancer, or extent of disease, is based on information gathered through the various tests done as the diagnosis and work-up of the cancer is being performed.

Radiation therapy has become the primary treatment of anal squamous cell cancer. The radiation comes in the form of high energy x-rays that are delivered to the patient only in specific areas where the cancer is present. These x-rays are similar to those used for diagnostic x-rays, but they are of a much high energy. The high energy of x-rays in radiation therapy causes damage to the DNA of cells. Cancer cells divide faster than healthy cells, thus their DNA is more likely to be damaged than that of normal cells. Additionally, cancer cells are generally less able to repair damaged DNA than normal cells. Cancer cells are killed more easily by radiation than normal cells are. Radiation therapy uses this difference in cells to treat cancers by killing cancer cells, while killing fewer cells in normal, healthy tissue.

If the cancer has spread to distant parts of the body, chemotherapy drugs such as cisplatin, carboplatin, oxaliplatin, leucovorin, paclitaxel and 5FU may be used without radiation to reduce the number of tumor cells and prevent or minimize symptoms all over the body. This is the case because chemotherapy is able to travel throughout the bloodstream, while radiation is not. In this setting, radiation may be used separately to relieve certain symptoms, such as pain, from cancer in other parts of the body. Unfortunately, if cancer is present in organs distant from the anus, chemotherapy is generally not very successful at controlling it.

Cancer survivorship is a relatively new focus of oncology care. With some 15 million cancer survivors in the US alone, there is a need to help patients transition from active treatment to survivorship. What happens next, how do you get back to normal, what should you know and do to live healthy going forward? A survivorship care plan can be a first step in educating yourself about navigating life after cancer and helping you communicate knowledgeably with your healthcare providers. Create a survivorship care plan today on OncoLink.