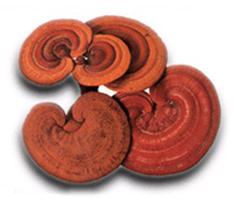 Ganoderma lucidum (GL) is a reddish colored mushroom that grows on oak trees in China, Japan, Russia, and the eastern United States. Studies of the DNA of mushrooms from these various locations reveal that they are very similar, but it is uncertain if they are truly interchangeable. There are several other species, including Gandoderma tsugae, which are similar. In fact, researchers are uncertain if the species vary in their medicinal properties or not. These mushrooms are rarely found in nature and most purchased forms of GL have been cultivated. There are two forms of GL, one that grows flat and large from a single stalk (pictured above), and another that grows in an antler shape, with multiple tall stalks and small or no cap. It is believed that these two types of GL have different healing properties.

GL has been used for centuries in traditional Chinese medicine to preserve vitality, promote longevity, and prevent or treat a variety of illnesses, including cancer and heart disease. It is considered a powerful remedy, and in ancient times it was reserved for the emperor and his court.

GL is primarily used in cancer therapy for its ability to stimulate the immune system. In addition, it can increase the activity of standard cancer treatments (chemotherapy and radiation therapy) and help decrease the side effect of these therapies. GL has been shown in laboratory studies to activate immune cells including T lymphocytes, macrophages, Natural Killer cells, and cytokines (interleukins, tumor necrosis factor and interferons), which may help the body attack the cancer cells. GL is sanctioned by the Japanese Health Ministry to be given in conjunction with standard cancer therapy.

GL has been shown in laboratory studies to suppress angiogenesis (the growth of a tumor’s own blood supply) of prostate cancer cells. Laboratory studies have found GL can work against estrogen receptors, potentially preventing or treating some breast cancers. In addition, lab studies of human colon cancer cells found that GL caused cell death and had anti-inflammatory properties. Laboratory studies on leukemia, lymphoma and myeloma cells found that GL caused cell death. It is important to remember that all of this research has been done in a laboratory setting and studies are needed in humans to determine if the effects will be similar.

GL is thought to have anti-viral and liver-protecting properties, and is being studied in the treatment of Hepatitis B and in the prevention of Hepatitis B patients from developing hepatoma (liver cancer). Other claims include promotion of heart health (including lowering blood pressure and prevention of cardiovascular disease), treatment of autoimmune disorders, HIV/AIDS, asthma, and chronic bronchitis.

Researchers believe polysaccharides and triterpenes are the medicinally active compounds in GL.

The "fruiting body", which is generally the part that grows above ground. The mushroom itself is tough and quite bitter and therefore not really edible. The active ingredients can be "released" by simmering in water for 2 hours, resulting in a concentrated liquid that will taste quite bitter. GL is available commercially as a dried mushroom (or powder), tea, tincture (prepared by simmering the dried mushroom in water or alcohol for several hours) or a syrup.

Some have reported diarrhea and low blood pressure when high doses are consumed, but overall, medicinal mushrooms are safe. The concern comes when the consumer purchases a product other than the whole mushroom and cannot be certain of the ingredients.

Please see Are Dietary Supplements Safe? article for more information on the safety concerns of these products.