Brachytherapy is a form of radiation treatment where a source of radiation is put inside your body. This allows a higher dose of radiation to directly reach the area where the tumor is or was prior to surgery. High Dose Rate (HDR) brachytherapy helps to shrink the tumor and is typically used if the tumor is located in the major bronchi, blocking an airway. Tumors in the lung tissue, rather than the bronchi, should be treated with external beam radiation therapy, not HDR as the effective radiation only penetrates about 1 cm. 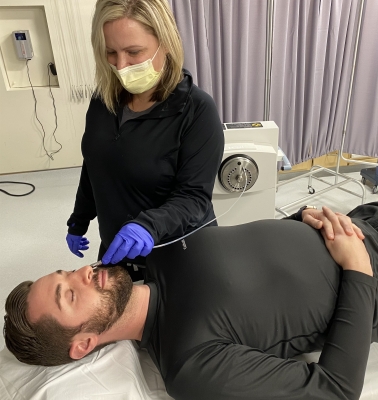 Endobronchial Brachytherapy is usually given as an outpatient treatment in the radiation oncology department in partnership with your pulmonologist. Less often, it can also be done during surgery. Brachytherapy is most often given as 3 treatments spaced 1 week apart.

Before the treatment, a provider will numb the back of your nose and throat with a numbing spray. Then a hollow flexible tube, called a bronchoscope, is inserted through your nose and down the back of your throat. It will go down through the airway to allow the provider to see the area that is blocked. One or two smaller tubes, called a catheter, are left in position and the bronchoscope is removed. The bronchoscope is then re-introduced with the catheter in place to carefully mark where the radiation will be delivered.  The radioactive source will travel through this tube. A CT scan or an x-ray will be done to ensure the catheter is in the correct position as previously marked by the bronchoscope. This image will be used to plan your treatment.

The afterloader is operated from outside of the room. Your treatment team will leave the room during the treatment, but they can hear you and see you at all times. You will be able to communicate with the team during treatment if necessary.

After the treatment is complete the radiation source is retracted back into the afterloader. A member of the treatment team will double check that the source was fully retracted. Then the tube will be removed from your nose. You will not be radioactive after the treatment and you will be able to leave as soon as you recover from the anesthesia from the bronchoscopy.

Benefits and Side Effects of Endobronchial Brachytherapy

There are several benefits of endobronchial brachytherapy treatment for lung cancer. Benefits include:

Possible side effects can include sore throat, cough, shortness of breath, coughing up blood and increased phlegm.

This is done through a surgical procedure. Temporary implants are useful for the treatment of mediastinal, paravertebral, or chest wall tumor beds after surgery and removal of the tumor.