Three-dimensional conformal radiation, also called 3D conformal radiotherapy or 3D-CRT, became widely used in the 1970s-80s. This was a result of advances made in imaging technologies.

CT-guided therapy allows the tumor and normal organs shape and size to be defined in three dimensions. Instead of using a "flat" image of an x-ray that only shows the tumor's height and width, which is used for conventional 2D radiation therapy.

What is the treatment planning process for 3D Conformal Radiation Therapy?

You will need to have a simulation done with you in the treatment position. 3D imaging will be taken to allow for the best treatment planning. At least one of the following imaging tests will be done:

After imaging is done, the tumor is outlined in three dimensions. Normal organs that are found near the tumor and need to be avoided are also outlined in 3D (figure I, below).

Beams are then arranged to avoid healthy tissue while giving a specific dose of radiation to the tumor. Special computer software is used to see the amount of radiation the tumor and normal tissues will receive to make sure that all parts of the tumor are getting the correct dose. The beams are shaped and aimed at the tumor from many directions. Using several beams, as opposed to a few beams, helps reduce the damage to the normal tissues.

How is the beam shaped?

Beams are shaped to avoid treating healthy tissue. There are two ways of shaping the beam:

What can I expect during 3D Conformal Radiation?

You will be scheduled for a 20–30-minute treatment time. The 3D conformal radiation treatment process is similar to other types of radiation. Your radiation oncologist will determine how many treatments you will get and how many times per week you will get radiation. The same radiation beams will be used in each session.

What are the possible side effects?

Some people do not have any side effects. However, if you do have side effects, they are related to the area that is being treated. Some common side effects are:

Is 3D conformal radiation right for me? 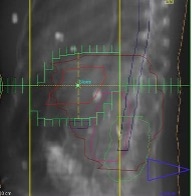 Figure II. Shown in green are the leaves or multileaf collimator (MLC) used to shape the radiation beam. Each leaf can be moved independently to form shapes. The kidneys are being shielded (pink and green structures) while the maximum dose is going to the tumor (red).