There are an estimated 100,000 new cases of early stage, node-negative, estrogen receptor-positive breast cancer each year in the United States. These patients are frequently treated with adjuvant chemotherapy (chemotherapy given after surgery), although only a small portion of these patients will ultimately derive any benefit from this treatment, in terms of both living longer and living without breast cancer recurrence. This means a significant number of patients are subjected to the toxicities of therapy for little or no gain. Determining which patients will benefit from chemotherapy has long been the million-dollar question facing clinicians, but now there is a new tool in the box.

Oncotype Dx™ is a laboratory test that evaluates a sample of the breast tumor to predict a woman's risk of developing a recurrence over 10 years and the benefit she would derive from adjuvant chemotherapy. The test is specifically designed for women with stage I or II, estrogen receptor positive breast cancer that has not spread to the lymph nodes. The test assumes that the woman will be taking hormone therapy as part of her therapy, so it cannot be used to predict risk without using this therapy. The test has not been validated for women with tumors that do not fit these criteria (including DCIS or LCIS), but studies are evaluating its use in a variety of situations.

Is the Test Right for Me?

To better understand if this test is right for you, an understanding of normal breast tissue is helpful. Breast tissue is composed of lobules, which produce milk; and ducts, which carry the milk to the nipple. Breast cancer starts in a duct or a lobule, and where it starts, along with its appearance under the microscope, are what determine the type of breast cancer one has (i.e. ductal cancer vs. lobular cancer). The type of breast cancer can dictate some of the treatment choices, although many types are treated similarly.

The tumor must also be estrogen receptor-positive. This information is found on your pathology report and means that the cancer is likely to respond to hormone therapy. The Oncotype Dx™ test is used to help you and your physician determine if chemotherapy is right for you. Therefore, it should be done before beginning any therapy for your cancer.

How does the test work?

After the woman undergoes surgery (lumpectomy or mastectomy) and it is determined that the tumor meets the previously mentioned criteria, samples of the tumor are submitted to Genomic Health, Inc., where the test is performed. Scientists determine the levels of expression of 21 specific genes in the tumor tissue (16 of the genes are cancer-related; the other 5 are used as "reference" genes). Based on the level of expression of each of these genes, a score is assigned. This is called the Recurrence Score™ and is on a scale of 0-100, with higher scores indicating a greater risk of recurrence.

It is important to note that the genes that are being looked at are the mutated genes that are a part of the tumor, and not the entire set of genes that you inherited from your parents. Genetics is the study of genes that are inherited and passed on from generation to generation. These genes are responsible for many characteristics, including hair and eye color. Increased risk for certain diseases can also be passed on through genes. BRCA1 and BRCA2 ("breast cancer genes") are an example of this, and women with abnormal versions of these genes are at higher risk of developing breast cancer.

The science used in the Oncotype Dx™ test is called genomics. This type of test looks at the genes that make up the tumor and evaluates how they interact and function. It looks at how active various genes are within the tumor, which may influence how the tumor grows and responds to treatment.

The Recurrence Score™ and predicting recurrence

To demonstrate how the Recurrence Score™ could predict risk of distant recurrence, scientists used tumor samples from women enrolled in clinical trials previously done by the National Surgical Adjuvant Breast and Bowel Project (NSABP) (study B14) and Kaiser Permanente to validate the Oncotype Dx™ test. These samples were tested and correlated with what actually happened to those patients. This was possible since it had been over 10 years since the studies were performed, and thus researchers could easily determine which patients had developed a distant recurrence. The Recurrence Score (RS) correlates with the likelihood of distant recurrence at 10 years (given in a percentage value). This percentage is based on the number of women in the 2 clinical trial groups who have the same RS as the submitted sample and who experienced distant recurrence. For example, if a woman's RS was found to be 10, the report would read "patients with a RS of 10 in the clinical validation study had an average rate of distant recurrence at 10 years of 7%".

The Recurrence Score™ (RS) is further broken down, based on risk of recurrence, into low risk (RS < 18), intermediate risk (RS between 18 and 30), and high-risk (RS > 31) groups. Researchers found that 51% of the tumor samples examined fell into the low risk group, 22% into the intermediate risk group, and 27% into the high-risk group. The rate of distant recurrence (found in other organs, such as bone and liver) at 10 years was 6.8%, 14.3%, and 30.5%, for the groups respectively. The groups were also found to differ significantly in relapse rates (local and regional, which occur in the breast or local lymph nodes) and overall survival. This demonstrated that more than half of these women were at a relatively low risk of developing a recurrence.

The Recurrence Score™ and chemotherapy benefit

Although the information on recurrence is valuable, doctors wanted to know if the test could be used to predict how much benefit a woman would derive from receiving adjuvant chemotherapy. Utilizing tumor samples from another NSABP trial (study B20), researchers showed that the RS could predict which patients would and would not benefit from chemotherapy. In the NSABP B20 trial, women in the chemotherapy arm of the study received either CMF or MF chemotherapy regimen ( methotrexate, fluorouracil +/- cytoxan); leading researchers to believe the results may only be valid with those regimens. The study did find that, when separated, the CMF and MF groups had similar results. In addition, smaller studies looking at other regimens have found that the relationship between the RS and benefit from chemotherapy is likely not regimen specific.

How Does the Score Affect Treatment Decisions?

When the Oncotype Dx™ test was introduced; it was thought that the results would have an influence on treatment decisions. After all, the test is designed to make these decisions clearer. Until recently, the extent of this influence was not known. In the past year, a few groups have shared just how much the test has influenced treatment choices in practice. One study found that 27% of patients changed their treatment plan based on the results of the test, with 90% of patients saying that the test influenced their treatment decisions and decreased anxiety over the decision. In the same study, 31.5% of oncologists changed their treatment plans based on the result. This change most often was a decision that chemotherapy was not necessary. In addition, the test results improved the physician's confidence in his/her decisions.

Other physician groups reported similar trends. One group also reported that the use of chemotherapy decreased by 50% in the eligible population since the test became available. As expected, those who had a low RS score were generally treated with hormone therapy alone and those with a high RS were generally given chemotherapy.

The American Society of Clinical Oncology (ASCO) and the National Comprehensive Cancer Network (NCCN) publish guidelines for the treatment of various cancers. Panels of experts in the specific field update these guidelines routinely. Both the ASCO and NCCN have added the Oncotype Dx™ to their breast cancer treatment guidelines for 2007 and 2008, respectively. The NCCN recommends the test for use in those women with 0.6-1.0 centimeter tumors with unfavorable features and those with tumors greater than 1 cm, with no lymph node involvement and Her2 negative status. Studies are continuing into the use of the test.

One ongoing trial to better clarify the benefit of adjuvant therapy for women with intermediate Recurrence Scores (RS) is called TAILORx. In this study, tumors of participants with estrogen receptor-positive, lymph node-negative and Her2-neu negative breast cancer will be tested using Oncotype DX™. Patients with a low RS who are predicted to have good prognoses without chemotherapy will receive hormonal therapy alone. Women with a high RS will receive chemotherapy and hormonal therapy. Those participants with intermediate RS will receive hormonal therapy and be randomly assigned to chemotherapy or no chemotherapy. For the purpose of the study, the Recurrence Scores have been adjusted a bit to be sure that those women who will benefit most from chemotherapy will receive it. For instance, the cut off for a high RS (and thus a high risk of recurrence) has been lowered to 25 for the study and the cutoff for a low RS (and thus a low risk of recurrence) has been lowered to 10 (the traditional high RS is >31 and the low RS is <18). 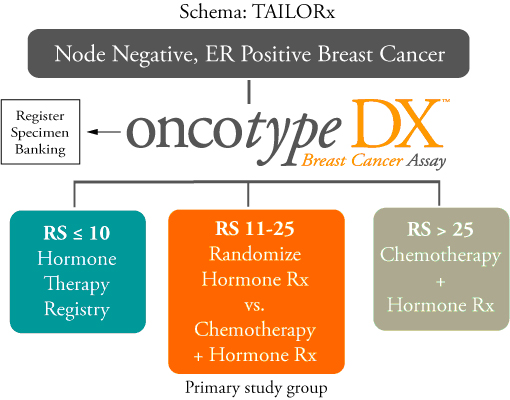 The study leaves the actual chemotherapy regimen used to the discretion of the treating physician. In postmenopausal women, hormone therapy can consist of tamoxifen, an aromatase inhibitor or combination of these, depending on physician preference. The study plans to enroll over 10,000 women, with results expected in 10 years.

While we await the results of the study, women with intermediate scores not participating in the study will need to discuss their individual risks with their physicians, taking into consideration age, tumor size, and pathologic features.

Other studies are looking at how to utilize the RS in predicting response to preoperative chemotherapy, and whether specific genes can be used as predictors for response to specific chemotherapy drugs (NSABP B40). There is an ongoing study (MINDACT) looking at another gene assay, this one evaluating the genetic "signature" of the tumor utilizing a 70-gene profile. Researchers are also looking at larger gene profiles and other genetic signatures as predictors.

The Oncotype Dx™ test costs about $3,500 and is covered by Medicare and many private insurance companies. Genomic Health will assist patients and physicians' offices with insurance claims, and offers financial assistance to women who qualify for financial need. The test could determine the necessity of 6 or more months of chemotherapy treatments and all the associated costs, making it beneficial for the patient and her insurers.

For women participating in the Tailorx trial, the cost of the test will be submitted to their insurance company, but if the charge for the test is denied, Genomic Health will cover this cost and the patient will not be responsible for the charge.

The Oncotype Dx™ test sets the stage for a new era in breast cancer treatment - that of "personalized therapy". By learning more about the genetic make-up of a woman's tumor and how it will respond to therapy, we can tailor therapy to the needs of the woman and eliminate the one size fits all therapy that has been used for many years. It is an exciting time and the future of breast cancer treatment looks bright.

by The 4Wholeness Team