When is radiation used to treat breast cancer?

People with breast cancer can be broadly divided into two groups:

If you have local/regional cancer, radiation therapy is often used after surgery to reduce the chance of breast cancer recurrence (cancer coming back). If you need chemotherapy as well, the radiation is typically given after chemotherapy is completed.

The type of surgery that you have determines how your radiation therapy is given. Surgery for breast cancer is most often either a lumpectomy or a mastectomy. 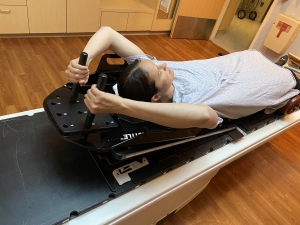 After a lumpectomy, radiation is often given to the entire remaining breast. The exception to this is in some older patients with smaller, less aggressive tumors. This helps to reduce the chance cancer will return in the same location or in other areas of that breast. Radiation is most often given using an external beam technique. This means the radiation beams are angled so that they skim the chest wall but cover the whole breast. This type of radiation is most commonly delivered in daily treatments (5 days a week) over several weeks to the whole breast. An additional week may be used to give an extra dose (called a boost) to the original tumor location.

In some cases after a lumpectomy, radiation will also be given to the lymph nodes under the arm (axillary). This depends on whether or not there was cancer found in the lymph nodes. Ask your radiation oncologist whether you need radiation to the axillary lymph nodes.

Another common way to give radiation after a lumpectomy is to target only the area of the surgical cavity (the spot where the tumor was removed) with radiation, rather than the whole breast. When breast cancer comes back after treatment, it is often in or near the surgical cavity. By targeting this area, it limits the radiation exposure to the rest of the breast, chest wall, heart, and lung. This method is called "accelerated partial breast irradiation" or APBI. Long-term follow-up effects of this approach are not yet available.

Some patients with breast cancer have a mastectomy. Not everyone who has a mastectomy will need radiation. Radiation is used when there is more of a concern that there are tumor cells still remaining. To determine the level of concern, your provider looks at:

If these things point to a higher risk of cancer coming back at the chest wall (where the breast tissue previously attached) or in the nearby lymph nodes, radiation can reduce that risk. Treatment involves daily radiation (5 days a week) for several weeks, using external beam radiation therapy. In this case, the radiation is designed to skim the chest wall to avoid radiation exposure to the lung and, in left-sided cancers, the heart. If you have had breast reconstruction, the radiation target will include the reconstructed breast.

Special Techniques to Reduce Side Effects 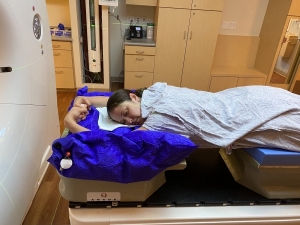 Patient in "prone" position for breast radiation using a breast board and arm immobilizer.

In some cases, it is difficult to avoid the lung and/or heart during radiation. There are some options that can be used to minimize exposure to normal tissues. These options are:

After treatment, talk with your oncology team about receiving a survivorship care plan, which can help you manage the transition to survivorship and learn about life after cancer. You can create your own survivorship care plan using the OncoLife Survivorship Care Plan. For more information about the long-term effects of radiation therapy for breast cancer, read our article, Survivorship: Late Effects after Radiation for Breast Cancer.