Drs. Peter Nowell and David Hungerford, two Philadelphia researchers, were experimenting with cells from various types of leukemia when they noticed a smaller-than-normal chromosome number 22 on the cancer cells of 2 individuals with CML. With the far less sophisticated techniques of the time, they were unable to tell what happened to the material missing from the small chromosome. 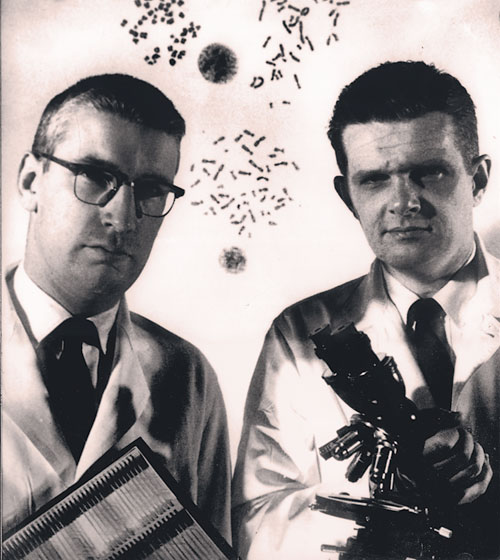 Nowell and Hungerford published their research in 1960, describing the abnormality that had then been found in 9 out of 10 CML patients they studied. The findings were confirmed by a group in the United Kingdom, and the abnormality was subsequently named the Philadelphia Chromosome, for the city in which it was discovered. Nowell and Hungerford had demonstrated that this genetic change was required for the development of CML - a novel and often unaccepted concept at that time.

It would be 1972 before another researcher, Janet Rowley, MD, would discover the missing piece of chromosome number 22 attached to chromosome number 9, thereby identifying the first known chromosomal translocation. The 9;22 translocation is found on the leukemic cells of more than 95% of patients with CML. As the field of genetics grew, it was discovered that the gene abl (pronounced "able"), normally located on chromosome 9, had attached itself to the gene bcr (pronounced "b-c-r") on chromosome 22. The bcr-abl gene encodes a protein (called tyrosine kinase), whose activity results in too many stem cells developing into white blood cells, leaving a shortage of other cell types. This genetic change to bcr-abl occurs during a person's lifetime and is not passed on to future generations or inherited from parents.

Flash forward to the 1990s, when a group of researchers, led by Dr. Brian Druker in Oregon, began work on a medication known as STI-571. This would become the first medication to specifically target cancer cells – in this case, the target is BCR-ABL. The first group of patients involved in studies of this medication, later named imatinib (Gleevec), had failed other treatments and joined the STI-571 trial as a last effort. Nearly all of the patients saw their white blood cell counts return to normal within a few weeks of starting the therapy. This medication – the result of nearly 40 years of research – would change the future of cancer care and how researchers look at treatments.

Imatinib was the first of many targeted therapies that have changed how we treat many cancers – and it all started with an interesting discovery in a small lab in Philadelphia.