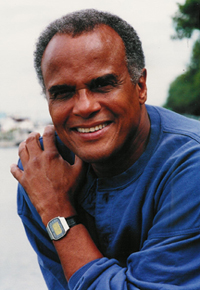 Many celebrities use their famed status to draw attention to the issues that are near and dear to their hearts. Few people, however, are as passionate about disposing of social stigma and raising awareness about prostate cancer, as Harry Belafonte. The man, who popularized calypso music, was faced with the reality of this disease eight years ago at the age of 69.

OncoLink spoke to Mr. Belafonte about his diagnosis and treatment, as well as how he overcame the social discomfort associated with this disease and triumphed over it. Harry Belafonte speaks candidly about incontinence and impotence and how these are such minor inconveniences for the price of survival and life.

OncoLink: Although prostate cancer is very common, one in six Americans will get the disease sometime in their life-time, most men have never even heard of a prostate until it affects them in some way. Could you take me through what led to your diagnosis?

HB: I wish I could present a more dramatic story, a more glamorous tale. Some people truly battle the disease where they go through multiple therapies and suffer side effects. My diagnosis was through a very normal process. I go to get regular check ups with my doctor twice a year. At one point, he noticed that my blood PSA (Prostate Specific Antigen) level was elevated. Based on comparative history, my physician knew to take a closer look. He sent me to a urologist who confirmed the primary doctor's suspicion and sent me for extensive testing.

The next step was to get a biopsy. The first biopsy was negative. We decided to monitor the situation closely, but my PSA continued to climb. I had a second biopsy which turned out to be benign too. But the PSA certainly showed that there was some activity in the region. It was not until the third prostate biopsy that we found the cancer.

When they discovered it I was very alarmed and concerned. All kinds of thoughts went through my head, like 'why me, oh Lord? I have been a good father, a good citizen and a loving husband. Why does it have to be me?'

I then realized that I had to make some decisions. I made a terrible mistake and did not let my family know about this diagnosis at the time. I wanted to get things settled first and decide on the therapy. I had to look very hard and very carefully into all my options. Weeks of discussions with many physicians ensued. We started immediately with radiation therapy and hormonal treatments. As time passed I sought multiple opinions around the country and asked each doctor one simple question: what are the odds for each of these treatments working? Where are the highest rates of success? I listened to all the pros and cons and decided that for me the best option is really surgery.

Since that time I have not looked back. I have been free of disease and feel that my survival is a gift. I have often asked myself how I can repay this gift and what I am meant to do. I decided that what I need to do is use my celebrity platform to encourage others to seek screening and seek treatment and to make difficult decisions like these to improve survival and wellbeing.

There are so many men out there, who for some reason resist making decisions. I began to reflect of the terrible price that we pay for not facing up to this disease. Men may feel that perhaps they did something to deserve it, something socially incorrect. I need to dispel this mythology. I need to raise awareness and reach out to people to get them to gather information. I want to be profiled to waken the nation to this crisis. Especially African American men, who are more prone to this disease, have to be made aware and encouraged to seek the medical attention they need and deserve.

OncoLink: As you alluded to, this disease is particularly devastating to African Americans who can get it at a younger age. Prostate cancer in younger men tends to be more aggressive and not responsive to hormonal manipulation. What should we as a society be doing to galvanize these men to get screened and get medical attention?

HB: It is not enough to put out advertisement and radio talk shows. These are all important, and I fully support these efforts, but by themselves they are not enough. In regards to the health care system and the African American community there are a whole host of conflicts, contradictions, and delinquencies. We are the most underserved and disadvantaged group in the country. If you are not a person of a certain education level, or intellectually challenged, or uninformed they you get lost in this system.

My mother was very poor and she had a terrible experience with health care in this country. She worked and supported all of us, but when someone needed medical attention, she needed to make an appointment just to be able to make a medical appointment. When we did see a medical professional the services were free but it required so much time and effort to set up a consultation. She was highly conflicted because she could not take the time off work, but at the same time she needed medical attention.

I also know of incidences where black people were racially abused by their health care providers who may not have been racially and gender sensitive.

Taken all this together, which is that reason why many African Americans don't get the medical attention they need? Probably all of these facets play a role.

While we continue to pursue research and a cure for the disease and continue to raise consciousness, we need to pay closer attention to the social and financial impediments that face many African Americans.

OncoLink: What should health care providers do to improve the situation?

HB: I think there are two things. One is to continue to talk to legislators, lobbyists, and companies who have an interest in screening people to detect disease while it is still early and relatively contained. Screening efforts may be good business for these companies. I do realize that there may some may consider this an unethical reason for a pharmaceutical company to get involved but we must increase our efforts somehow.

And, two, is to for health professionals to become the advocates for their patients. To reach into the community and to lead campaigns to increase and improve cancer screening and to facilitate health care access for everyone. We need to retrain the social culture. We need to get out of this depression.

OncoLink: Understanding the illness is crucial to regaining control of one's life. How did you get your information? How did you help yourself make complex medical decisions? Did your family help?

HB: No, my family was there for support but my medical decisions were made by me in conjunction with the advice I got from the doctors. I had many consultations and listened very hard to all sides and made the best decision for me --one that fit my life, life style, and values.

OncoLink: Adverse effects of prostate cancer therapy are not trivial. They are often embarrassing. By that I mean things like incontinence and loss of sexual function. Do you think that fear of these is keeping men from being tested and obtaining the diagnosis. Because they don't want to deal with these side effects?

HB: You know, I have been through the treatment and I did not find it embarrassing. There are many reasons men don't seek out the diagnosis. First off, there is a definite feeling of homophobia, especially in the African American community. A feeling of: "no doctor is going to penetrate my rectum with his finger". I have had many prostate examinations and I tell people where ever I go that at the completion of my medical evaluation, not one doctor has yet asked me for my phone number.

Even in the world of incontinence, you can always do things to improve it. There are exercises that really work. Plus, this is a function of age too. As men and women get older many of them have incontinence anyway. When you measure the level of discomfort that incontinence adds to your life and weigh that against survival and life itself, it seems too insignificant.

The same goes for impotence. That comes with age too. You can still have a great deal of joy and sexual intimacy with your partner. Plus, there are nerve bundle sparing surgeries that are being offered today that reduce your chances of this side effect of surgery.

OncoLink: From where did you draw your moral and psychological support?

HB: From everyone! My family is first and foremost. As I said, I made a terrible mistake. I went through the entire process alone until I decided on the treatment and then divulged it to my family. But family can be very comforting. And, no matter what course of therapy you choose, your family will be burdened by some aspect of the treatment. Some the problems will be very public and it is important to get support early on.

OncoLink: What advice would offer others who are in this position now?

HB: Closely examine your life, life style, and what problems you are experiencing. Get educated. Become more conscious of the world around you. Get the facts and shed the myths. One myth could only lead to another. If you have any pains or symptoms at all, find a center and get attention.

Can we choose happiness even in cancer?