How does cancer begin?

What is a mutation?

Cancer results from the breakdown of the controls that regulate cells. These controls all originate from the genetic plans in a cell's DNA. Therefore, a mistake or change in a cell's DNA code would cause problems with the cell's control system. A mutation is a change in the normal DNA code. A mutation can be spontaneous or caused by outside factors. Mutations can have large effects on the cell or no effect at all.

What are cancer genes?

Cancer genes are specific parts of DNA that when mutated, can lead to cancer. Cancer genes can be divided into two major categories: oncogenes and tumor suppressor genes. In normal cells, these two types of genes work together to regulate cell division.

Oncogenes are genes that usually produce positive signals that promote cell division. When mutated, these genes become permanently "turned on," causing cancer cells to continuously divide out of control. A defective oncogene is analogous to a car with the gas pedal stuck in the "on" position. It will move forward whether you push the pedal or not and can't be stopped. 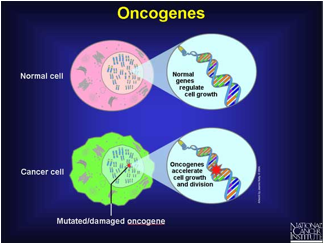 Tumor suppressor genes are genes that usually produce negative signals that tell cells not to divide. When mutated, these genes become permanently "turned off," allowing cancer cells to divide even when they are not supposed to. A defective tumor suppressor gene is like a car with a broken brake system. You won't be able to stop the car when it is moving. 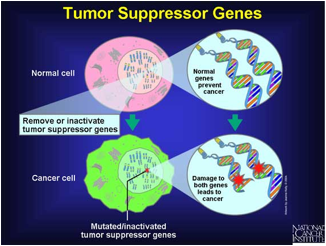 Where does cancer come from?

The mutations that cause cancer can come from a variety of sources:

Heredity. Some people have a genetic predisposition towards cancer. Their genes can be more susceptible to a mutation or they can be born with a mutated gene. This is why family history is important when discussing cancer risk.

Infectious Organisms. Certain viruses, bacteria, and parasites have been found to cause some cancers.

How do tumors start?

Cancer is started by a single mutation in a cell. This mutation is irreversible damage to the DNA. The substance or organism that causes this initial mutation is called the initiator. An initiator, however, does not immediately cause cancer. The mutated cell needs the continuous action of a promoter to turn into cancer. A promoter is a non-carcinogenic substance that when applied repeatedly, amplifies cancer-inducing effects of the initiator. They induce the proliferation (reproduction) of the cell, giving rise to a large number of daughter cells containing the mutation created by the initiator. At this point, the mass of mutated cells is usually a benign tumor.

How does a tumor turn into cancer?

The promoter causes cells to divide at an abnormally fast rate. When cells divide this fast, the probability that additional mutations or mistakes in DNA replication will occur greatly increases. Eventually, so many mutations have occurred that the growth of the cells in the tumor becomes completely unregulated. The term progression is used to describe the transformation of a benign tumor into a malignancy (a cancerous tumor).

How does cancer grow? »