What is a penile implant (prosthesis)?

A penile implant is a device that is surgically placed in your penis to allow you to get an erection. This device is used for men who have tried other erectile dysfunction (ED) treatments like oral medications, urethral suppositories, vacuum devices, or injection therapy without success.

There are two types of implants:

How is the implant placed?

Penile implant placement is a minor surgery often done on an outpatient basis so that you can go home that day. General (meaning you will be asleep) or spinal anesthesia (also called spinal block) is used. The operation usually takes about 45 minutes. It is done through a small incision (cut) in the scrotum or just above your penis, depending on your case.

If there is bleeding, a small drain will be placed and you may stay overnight in the hospital. The drain is removed the next morning. In general:

What are the possible side effects of the procedure?

What should I notify my provider about?

You should notify your provider right away if you have any of the following symptoms after surgery:

Your provider will tell you when to return for follow-up.

What else do I need to consider?

Although the cylinders expand in length and width, the erection that you get with an implant is often smaller than your natural erection before having erectile dysfunction. The erectile bodies in some men do not extend fully into the tip of the penis. This is a separate compartment that normally fills with blood in men who do not have ED. If the cylinders do not extend far enough into the tip of the penis, the head of the penis may "droop" somewhat with erections. This should not affect sexual activity.

An implant does not change the sensation (feeling) on the skin of the penis. It does not affect the ability to reach orgasm or ejaculate. 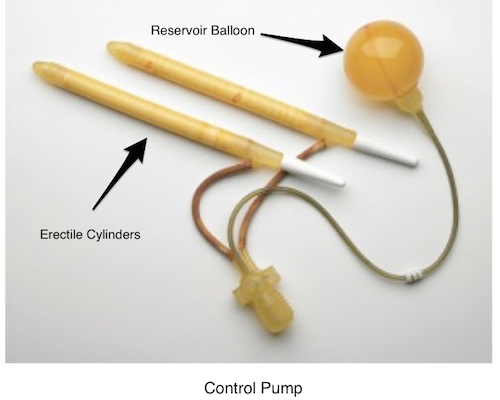