This Is A Hell Of A Way To Lose Weight! 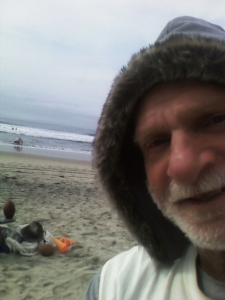 That’s what I said to myself at about 40 years of age as I looked into the hospital room mirror while by myself one day. No hair, no eyebrows, no hair period! But I did lose 50 pounds! To which I had declared that victorious statement, “This is a hell of a way to lose weight!”  I had been overweight from drinking beer for a long time, complete with a beer-belly, moderate, I would like to say.

I had asked my oncologist one day, “I was hit sharply in my testicle by a hit baseball and took it squarely on the testicle. Could that injury have caused or contributed to my testicular cancer?”  To which he had said, “I doubt it.”  Then I asked if my problematic delivery as a baby could have caused or contributed to it…that the male baby had significant genital swelling, and determining the gender was at first impeded by so much genital swelling. That they didn’t know if it was a boy or a girl! Even my mother recounted many times that situation to me. She said I had a mass of curls on my head at birth, and that contributed to not knowing the gender for some while. The oncologist said he didn’t think the genital swelling contributed to my cancer. That it’s just the odds, genetics, etc.

“One day at a time” really is the way to go. Twice my doctor had advised, “It might be best for you to get your affairs in order.”  His meaning was that I could die from treatments and/or the progression of the disease itself. In 1992, the nomenclature was “Stage II’, “Bulky Disease”, seminoma-type recurrent metastatic testicular cancer, retroperitoneal lymphatic tumor, size of a large grapefruit. Man…was it painful too!

At that time, they were just starting to discover and use Duragesic pain patches, fentanyl! They mismanaged increasing pain patch dosing strength, then decreasing patch strength, and I ended up in the Emergency Room with severe withdrawal symptoms one very late night. Hellish! Sudden onset of giant worms crawling in the body’s muscles, seemingly alternating here and then there! I had to slap my face, then hit my thigh with my fist  to try to quell those giant worms. I was watching TV one evening with my Mother and brother. Then all of a sudden, there they came…unannounced…completely unexpected and frightening! My Mother and brother of course asked what’s wrong? I said, “I don’t know!”  My brother, baffled as well, loaded me into the car and took off to the hospital with me wrapped in a blanket. They diagnosed “dystonic reaction”…dystonia, fentanyl related. Severe withdrawal symptoms.

“Cured!”  “Full remission!”  True! Of course that’s good. But side effects still plague me. Like lifetime moderate incessant tinnitus—ringing ears—from 4 rounds of BEP combination chemo (Cisplatin/Etoposide/Bleomycin). I got a small apartment not far from the ocean—it’s no coincidence—for the purpose of having ocean-wave sounds give relief to my never-ending ringing ears. The wind and background sounds help a lot too. Such as the happy screams of children and young adults, as well as music from here and there. Have to always keep my mind active…distracted…or the never-ending ringing would drive me stark raving mad!

Stress, the real killer! Beware the killer stressors of life! Immune systems at risk! Immune protection faltering! At my ripe old age now of 69, I get sick very easily, so I’ve learned to not even shake hands with anyone! I fist bump or even elbow bump! Sometimes a very cautious hug, if warranted. If I violate those practices, I get sick. I even get sick from playing catch with people with my football out on the beach. I’ve begun wiping off the football every so often with SaniWipes just to reduce my exposure to all those germy germs! (While I compose this account, I’m sick! Moderate sore throat, ill feeling, and a headache!)  I have to clean off the football, or whatever, more often, more thoroughly. (I explain to others my situation so they don’t instantly offer me a courtesy ride to that very friendly personal help center in the unincorporated area of town!)

Very important: I’ve found regular exercise to be absolutely indispensable for a good self image, the regular infusion of serotonin and other beneficial compounds into the blood stream, a sense of coordination and good health, appreciation of physical ability and acumen by others (showing off!), cardiovascular benefits and knowledge that the heart is healthy and strong, a feeling of returning to a state of very good health and physical ability, and other unidentified reasons.

Keep the faith. Stay optimistic. Keep up the good fight! Never give up! Believe it will turn out ok. One day very soon, you will be back to your favorite activities and places and will be with your very favorite people in the whole world! Physicians, medical personnel, science, and treatments helped me defeat that scary and terrible disease…it’s true. Now at 69, I’ve mostly old age problems to deal with…which is ironic…right? I didn’t die, so now I have old age problems! Very bad low back, COPD/asthma, immune problems, shingles with occasional PHN (look it up), a slowly worsening cataract in one eye, frequent bacterial and viral illnesses. Oh, well! At least, my cancer is definitely history and far, far off in the rearview mirror! Yea!