Hi, I'm Bob Manning.  On Valentine's Day 2012, I was diagnosed with pancreatic cancer.

For about the two weeks before I had an ache in my stomach, finally I turned jaundice and my primary care doctor sent me to the hospital. I was admitted and had had an ERCP.

While I was still in recovery, the doctor told my wife he was 99% sure I had pancreatic cancer and told her not to tell me until it was confirmed by an oncologist. That night she stayed awake in my hospital room all night wondering how she was going to NOT tell me considering the dire diagnosis. Finally, she decided to tell me in the dark of the early morning.

All we had ever heard is that a person with pancreatic cancer lived not much more than 6 months, if that long.

The very first thought that passed through my mind was "What?! I'm not going to be dead in 6 months, I feel too good".

Finally, I just could not read any more negative outcomes and just stopped looking.

I found a cancer survivor on the Penn site who talked about surviving for 2 years after a pancreatic cancer diagnosis. He said that the odds are a summary, but he was an individual - he was not the odds. I decided to do whatever I could to change my individual odds.

Needless to say, we had some dark days. I felt I was being gypped because time with my loving wife was being cut short. I thought of Jim Croce's "Time in a bottle".
There was one day when we sobbed together.

One dark day, Ronnie, my wonderful wife, looked me in the eyes and said "you're alive today, live it, the day you die is the only day you die of cancer. That changed my perspective to a more positive way of thinking.

On March 1st, 2012 I got the call that my whipple was scheduled for March 6th. I had done a lot of research on the whipple and was very concerned about the operation. I was scared, so I called back and asked for it to be rescheduled to the following week, but then thought why am I waiting, let's get this over with. So, on March 6, 2012 I had my whipple.

The surgery went well. I had a couple ups and downs the first few days after surgery, but I recovered, went to rehab, and completed that early.
As my wife drove me home, we both had tears of joy in our eyes as my wife played "Going Home" by the Beatles on the car radio. I had wondered if I'd ever see home again.

I then met with Dr. O'Dwyer at Penn in May, had my port implanted and started my 15 cycles of chemo. Let me encourage anyone who is about to go through chemo to have a port implanted, it makes the whole damn process much easier.

Dr. O'Dwyer answered every question we had. He gave us the straight facts and told us everyone is an individual and everyone's cancer is individual.
I had the normal ups and downs of chemo that included one or two times skipping a session because of low blood counts. For the most part chemo when fairly well, except for my first chemo session that resulted in a severe gout attack that sent me to the ER. Dr. O'Dwyer told me that was actually a good sign, because dying cancer cells give off uric acid. It was a sign that the chemo was working.

In late June I met with Dr. Metz at Penn. I immediately felt at ease with him and scheduled sessions of Proton radiation over 6 weeks. Let me just say, if you are to get radiation, and if Proton is appropriate, go for it. I had minimal side effects from Proton radiation because it is so targeted. It gives off the vast majority of its energy at the targeted cells using a pencil beam. None of the radiation goes beyond that.

During radiation, I wore a chemo pack 24 hours a day. It is tough, but you will be surprised that you do get somewhat accustom to it, or maybe you just learn how to live around it. Getting washed and dressed was difficult. Sometimes I felt like I was walking a tight rope trying to do some things constantly thinking about the attached Chemo Devil pack. This is one more reason why you should get a port.

During chemo and radiation I continued to drive to work and put in a full day. It was the best thing I could have done. It kept me busy, gave me a break from thinking about cancer. Most days I felt tired, but good. Only the couple days after chemo I felt achy with a fever like I had the flu. I had scheduled my chemo for Wednesday, so the flu feeling didn't hit me until Friday night.

I completed chemo in November and was still pretty feeling good. 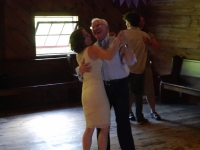 Bob dancing with his daughter at her wedding, 6 months after treatment.

My Oncology team did a great job of managing my chemo side effects and I got through it all, beat up, but still standing.
I had set mental mileposts in my mind of 3 months and 6 months.

At 6 months, I had just completed radiation and felt more determined that I was going to beat the odds.

We had a joyous family reunion at Christmas with all 5 children and their spouses from our combined family. Our children are spread across the country from Connecticut to California, so it was a big accomplishment to get everyone together at the same time. This was 9 1/2 months after my surgery, I had beaten some of the worst odds. I was alive long past the 6-month milestone, and beyond the 9-month milestone at which statistically most pancreatic cancer patients had died.
I try to live every day, even though cancer is always in the back of my mind. But gradually it passed through my mind less and less. 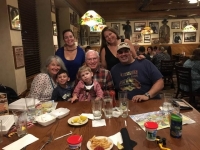 Here I am, 5 1/2 years after my surgery. I've been clean, with no signs of cancer. Mentally it is still there and always will be. But I can tell you that most days it doesn't pass through my mind, and when it does, it's just a fleeting moment that reminds me to live today and not let cancer invade and corrupt my psyche. Today it actually gives me strength.

One of my doctors, who had survived thyroid cancer, said that after cancer there is no such thing as a normal ache or pain. He said he would rather break his arm because he knows what that is. I laughed, but agreed that it was true.
I truly believe that having a positive attitude and the loving support of a spouse or very close friends improves your outcomes. Fight and don't give in to cancer.

Let family and friends hold you up when you need it. Don't be too proud to say you're down and need support.

You'll never look at life the same after cancer. And believe it or not, that's a wonderful gift.

Remember, cancer does not define you, it is only an event that happened to you, just like any other major event in your life, scary as it may be. It's only a chapter in your life, not your life story.

Don't let it be your life story.

Live every day for the gift that it is.

All in the Family – A Story about Genetics and Breast Cancer