Total Skin Electron Beam Therapy (TSEB) is a radiation treatment that treats the patient’s entire skin surface. It is used to treat Cutaneous T-Cell Lymphoma (CTCL) and/or Mycosis Fungoides, a type of lymphoma that affects the skin.

In standard radiation treatments for cancer, multiple radiation beams enter the body from different angles. These pass through the tumor inside, and then continue straight through, exiting on the other side of the body. All tissues in the path of the beams are exposed to radiation, which can lead to side effects. If we were to treat the entire skin surface like this, the entire body would be exposed to radiation. This could cause many unwanted side effects.

In TSEB, a different type of radiation, called electrons, is used. This beam only penetrates into the first 1-2 centimeters of the patient’s body. This treats the area where the cancer is located (the skin), while exposing deeper tissues to only minimal radiation.

The exact schedule depends on the dose being given, the protocol used by the radiation center where you are being treated, and the radiation machine being used. Treatments are often given 3-4 days a week, for anywhere from 3-9 weeks. Depending on the machine used, you may be in the treatment room for 30-60 minutes each day. Much of this time is used to get you in the correct positions. The actual radiation treatment only takes a few minutes. 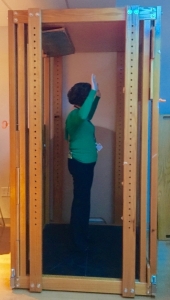 During each treatment, the patient stands naked in front of the radiation machine, which is several feet away. The patient may be standing in a box or enclosed area. This allows the radiation therapist to use different pieces of equipment to shield certain areas from the radiation. In many centers, the patient is positioned in a series of poses. These poses are designed so that all areas of the body needing treatment are exposed. Some centers have the patient stand on a rotating platform instead.

In some places, the entire body is treated with one treatment. In others, the beam is aimed at the top or bottom half of the body for the first part of the treatment, then the opposite half is treated. Certain areas of the body, such as the eyes, scalp and nails, are protected from the radiation with goggles and shields. The areas covered may change from day to day during treatment.

Other areas of the body, including the soles of the feet, the scalp, and the perineum (area between the anus and testicles in men and anus and vagina in women) are treated separately, since they are not well exposed during the treatment.

During the treatment, your therapist will leave the room. They can hear and speak to you through a microphone from a control room. You may hear the machines working, but you will not feel the radiation and it is not painful. It can be uncomfortable to be standing in these positions for so long. Let your therapist know if you are having any trouble. You are not “radioactive” after treatment and it is safe for friends and family to be around you.

What is spot treatment?

In some cases, you do not need the entire skin surface treated. If you need multiple areas treated, but not the entire body, spot treatments may be used. More planning is needed to map out these treatments and determine the correct dose of radiation. This planning is done during a “simulation” visit. During spot treatments, you will be lying on a table as opposed to standing.

In some cases, after TSEB treatment, the radiation oncologist may want to give some areas of the skin an extra dose of radiation. This is called a “boost”.

What if I have concerns during treatment?

What are the side effects during TSEB?

Your skin will become red, irritated, dry and darker. It may look or feel like a sunburn. This begins a few weeks into treatment and typically gets better a few weeks after treatment is finished.

Wear loose fitting, soft clothing. Avoid things that may be irritating to your skin, such as perfumed lotions or soaps, band aids, or shaving. Avoid scratching your skin. Learn more about caring for your skin in the Skin Reactions from Radiation handout.

You will lose all the hair on your body. This includes your head, eyebrows, pubic hair, hair on legs/arms, etc. Hair typically grows back several months after treatment ends. Be sure to protect your skin from the sun. Wear a hat or head covering to protect your scalp from the sun and cold temperatures.

Your finger and toenails will fall off if those areas are being treated. Keep your nails trimmed to avoid snagging or tearing them off. Keep the nail beds clean when the nails fall off. Do not use fake or acrylic nails.

What are the side effects after treatment?

The redness and irritation caused by the radiation will improve within a few weeks of finishing treatment. CTCL affects the appearance of your skin, so the redness in your skin may not clear up completely. Due to the radiation, the treated skin will always be drier and the color may be darker. Your skin will always be more sensitive to the sun. Be sure to use sunscreen every day, seek out shade when you are outdoors, and protect your head and eyes with hats and sunglasses.

TSEB can cause your sweat glands to not work as well after treatment. Sweating is one way our bodies cool off when they are hot. If you cannot sweat, you are at risk for over-heating. To avoid this, stay out of the sun. When it is very hot outside, stay in the air conditioning when possible. Do not expose yourself to high temperatures, such as saunas, steam rooms, hot tubs, and hot Yoga classes.