What is a pathology report?

A pathologist is a doctor who specializes in diagnosing diseases by examining tissue from the body. You will probably never meet the pathologist, but samples of your colon tissue, removed during surgery or biopsy, will be sent to them for review. The pathologist prepares a report of their findings. This is called the pathology report. This report contains important information about the tumor and helps to guide treatment decisions. You should request a copy of this report and keep it in your personal files.

What will you find on a pathology report?

The actual content of a report may vary based on where it is completed. The report is broken down into a few sections and may include:

To help you better understand your report, let's go through these sections individually.

This is generally not that important to the patient. It is a description of the sample the pathologist received and what they see with the naked eye. In a biopsy, the specimen is likely a small, nondescript piece of tissue, in which case the pathologist may describe the color, shape, feeling, and size of the tissue. After a cancer surgery, multiple organs or tissues may be submitted and described in the report. This might include size, color, and weight. For example, a colon specimen from a colectomy may be described as:

"Specimen #1 is labeled "colon" and consists of a segment of bowel measuring 13cm in length after fixation. The specimen is surrounded by a moderate amount of pericolonic fat. 3cm from one resection margin is an ulcerated round tumor measuring 3.2cm in diameter. The rest of the mucosa is grossly unremarkable."

This tells us the specimen was a 13cm long piece of the colon, with a tumor located 3cm from one end. This isn't very helpful in determining stage or treatment, so let's move on to the next section.

This is the meat of the report, but we need to know more about the colon in order to understand this part of the report. The colon, or large intestine, is a tube that is about 5 to 6 feet in length; the first 5 feet make up the colon, which then connects to about 6 inches of the rectum, and finally ends with the anus. The colon is made up of several sections. Your report may specify which section the tumor was located in. These sections are called the cecum, ascending, transverse, descending, and sigmoid colons, rectum, and anus (see diagram). The splenic and hepatic flexures are areas where the colon bends (or flexes) that are named for the organs they are located near.

The colon, which is shaped like a tube, is made up of several layers, starting with the innermost layer, the mucosa (which is made up of epithelium), and then the lamina propria and muscularis mucosa. This is surrounded by the submucosa, which is surrounded by two layers of muscle (or muscularis), and finally, the serosa layer, which is the outside layer of the tube. The outside of the colon is covered with a layer of fat, also called adipose tissue, which contains lymph nodes and blood vessels that feed the colon tissue. 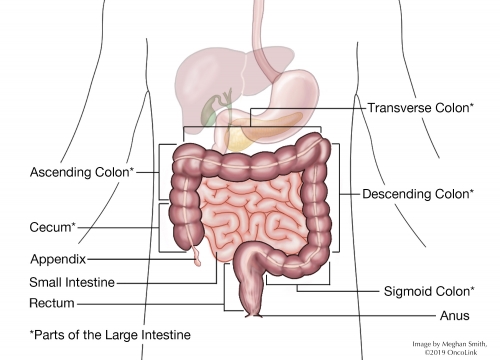 The type of colon tumor describes the cells from which the tumor arises. Adenocarcinoma is the most common type, accounting for 95-98% of colon cancers. An adenocarcinoma arises from the glandular cells that line the inside of the colon. Two subtypes of adenocarcinoma are signet ring and mucinous, which are both named for the way the cells look under the microscope. The other 2-5% of cancers found in the colon are lymphomas, gastrointestinal stromal tumors (GIST), and carcinoid tumors, which are not discussed in this article.

If a polyp was removed, this section will describe the type of polyp. A colon polyp is a benign growth that, over time, can turn into cancer. For that reason, they are removed during a colonoscopy and may be sent to the pathologist to determine what type of polyp it is. There are several types of polyps that can be found in the colon:

In addition, colon polyps come in two forms, called pedunculated and sessile. Pedunculated polyps grow on a stalk and look like a small mushroom, which can usually be easily removed during a colonoscopy. The sessile type of polyp is flat and grows on the wall of the colon. These are much more difficult to remove and may require surgery to remove the entire polyp.

When the pathologist examines the tumor and surrounding tissue available to them, they look at the tiny blood vessels and lymphatic drainage to see if any tumor cells have invaded them. This is different from the lymph nodes and would be reported as if lymphovascular invasion is seen or not seen. The presence of this may be a sign of a more aggressive or advanced tumor.

A tumor that has not invaded the surrounding tissues is sometimes called "in situ", while tumors that have penetrated surrounding tissues are called invasive. T stage is classified as Tx (tumor cannot be measured), T0 (no evidence of tumor), T1s (cancer cells are found only in superficial tissue, often called cancer in-situ or pre-cancer), T1, T2, T3, T4 describe the tumor based on size and if it has spread to surrounding tissues and structures. Some examples include:

The lymph system is essentially the "housekeeping system" of the body. It is a network of vessels (tubes) that connect lymph nodes. These nodes can vary in size but are normally up to about 2 centimeters in width. They contain cells that clear bacteria and other foreign debris from the body. Lymph is a watery liquid that flows between cells in the body, picking up foreign debris and taking it into the lymph node for filtering and ultimately, elimination by the liver.

Cancer cells use the lymph system as a first step to traveling to other areas of the body. During a colon cancer surgery, numerous lymph nodes are removed and checked for the presence of cancer cells. This will be reported as the number of lymph nodes that contained cancer cells and how many were examined. For example, the report might state "fifteen benign lymph nodes (0/15)" or "tumor seen in sixteen of twenty lymph nodes (16/20)."

This is the area at the edge of the specimen that was submitted. When performing a cancer surgery, the surgeon attempts to remove the entire tumor and some normal tissue surrounding it. This area of "normal tissue" is important because any stray cancer cells may be included in this. If the edge (or margin) contains tumor, there may have been cancer cells left behind. The goal of surgery is to achieve a "clear margin", that is, clear of any cancer cells.

Putting it all together

All of these pieces are used to determine the stage of the cancer and what treatment is needed. By understanding the basics of the report, you will be better able to discuss your treatment options with your healthcare team. The staging system most commonly used for colon cancers is the American Joint Committee on Cancer (AJCC) staging system. This system utilizes the extent of the primary tumor ( T0-4), the absence or presence of cancer in the lymph nodes (N0-2), and the existence of metastasis (M0 or 1) to assign a TNM rating, which corresponds to a stage. The staging system is quite complex. You can see the complete TNM staging for colon cancer in OncoLink’s Colon Cancer Article.

A molecular marker is something found in the blood, tissue, or other body fluid that is a sign of a normal or abnormal process, condition or disease. There are substances in some tumors that can gauge the likelihood of recurrence (prognostic marker) or predict a response to chemotherapy (predictive marker). Two molecular markers found in colon cancers have gotten some attention in recent years; "microsatellite instability" and "18q loss of heterozygosity."

Microsatellite DNA consists of nucleotide sequences, repeated over and over and linked together, which are found in all human genes. Molecular testing can identify instability, or errors, in the microsatellite DNA of tumors, such as a change in the number of repeat sequences; this is called microsatellite instability (MSI). MSI is a way to measure a deficiency of mismatch repair (MMR) in tumor DNA. A deficiency of MMR results in an increase in mutations within the colon cells, which partly contributes to the development of colon cancer.

There are two reasons to test colorectal cancers for MSI. The first is to identify those at risk for hereditary non-polyposis colon cancer (HNPCC). The second reason for MSI testing is that knowing an early-stage colorectal cancer has MSI may change the way it is treated.

HPNCC is a hereditary disorder that increases a carrier’s risk for other cancers, including endometrial, ovarian, stomach, pancreas, and kidney cancers. Individuals with HNPCC  should have specific cancer screenings and consider preventive steps based on their family history and personal risk. In addition, blood relatives of a person with HNPCC could also carry this genetic mutation. They may want to have genetic counseling and testing to determine how this affects their screening recommendations.

MSI testing identifies tumors as MSI-H (i.e. MSI-high), meaning they lack MMR proteins or are deficient in MMR proteins (dMMR), or MSI-stable and MSI-low, meaning they are considered MMR proficient (pMMR) or contain most or all of the MMR proteins. This information is especially helpful for those with stage II colon cancer. Studies have found MSI-H tumors are associated with a better prognosis. Approximately 22% of stage II colon tumors (but only 12% of stage III tumors) have MSI-H. Several studies have found that patients with stage II MSI-H tumors did not derive any benefit from 5-FU adjuvant therapy, and actually fared worse if they were treated with chemotherapy. This was true for stage III MSI-H tumors. MSI-stable disease, however, may benefit from 5-FU based treatment. Some experts recommend MSI testing as another tool to determine the need for treatment in stage II disease.

Humans have 23 pairs of chromosomes, for a total of 46 chromosomes, found in every cell in the body. Each chromosome contains over 1000 genes. Chromosome 18q contains two genes that are linked to tumor suppression. Over a person's lifetime, he or she can develop damage to genes or chromosomes due to exposures, such as smoking and viruses. Loss of one copy of chromosome 18q is called a loss of heterozygosity (LOH). Results of studies looking at the predictive value of 18qLOH have been conflicting. One trial found a greatly improved survival when no LOH was present (96% vs. 54%), but a subsequent trial did not confirm this, therefore further study is required. In addition, the current method of testing for 18q LOH is difficult to perform. More efficient techniques would be needed to make widespread use of this test feasible.

Other molecular markers being studied include KRAS, BRAF, a tumor suppressor called guanylyl cyclase 2, p53, and ERCC-1. Studies have found some of these markers to be useful in determining cancer treatment. For instance, anti-cancer medications that target the EGFR protein, such as, Cetuximab and Panitumumab, will not be effective in people who have a KRAS or BRAF gene mutation (defect). These tests are not the standard at this time, but some practitioners are using them, so you may hear them described to you.

Oncolink: Stage II Colon Cancer: To Treat or Not To Treat?

There’s an App for That! Cloud Storage-Part 2