What is the esophagus? 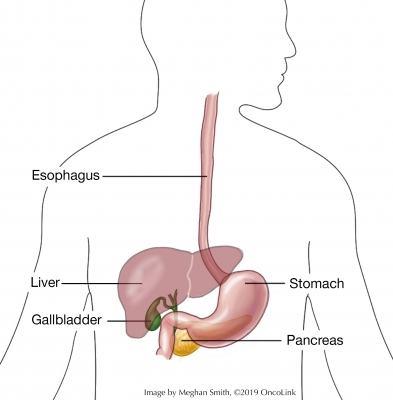 What is Barrett's esophagus?

Barrett's esophagus happens when the cells that make up the lining of the esophagus change as a result of frequent damage, and do not grow back normally. This change, called metaplasia, puts a person at higher risk of cancer. Instead of being made up of flat cells in many layers ("stratified squamous epithelium"), there is a single layer of tall-shaped cells ("columnar epithelium"), which are considered pre-cancerous.

How is Barrett's esophagus related to esophageal cancer?

What causes Barrett’s esophagus and am I at risk?

It is not known exactly how many adults in the United States are affected by Barrett’s esophagus, but it is thought to be anywhere from 1.6 to 6.8% of people. It is more common in developed countries with predominantly Caucasian populations (eg. United States, Europe). Specifically, Barrett's esophagus is most common among white males who have a history of chronic gastro-esophageal reflux symptoms.

How can I prevent Barrett’s esophagus?

Measures to prevent Barrett’s esophagus are primarily to treat chronic GERD. Work with your provider to determine a plan that includes medications such as antacids, stopping use of tobacco products, managing weight and changing your diet to include small frequent meals and avoiding eating for three hours before going to sleep. Avoiding bending over after eating a meal and raising the head of your bed may help lessen the amount of acid being regurgitated. You also want to avoid foods that increase your GERD symptoms, which may include spicy, high fat, dairy or acidic foods.

What screening tests are available?

The American Gastroenterological Association does not recommend screening the general population for Barrett's esophagus. Screening is reserved for those with chronic and/or frequent symptoms of GERD and with two or more risk factors for Barrett’s esophagus or esophageal adenocarcinoma (age greater than 50, Caucasian, obese, history of smoking, current or family history of Barrett’s esophagus, or esophageal adenocarcinoma). Screening for females is not recommended due to the lower risk factor as compared to men. However, screening could be recommended for women who have multiple risk factors. The risk factors are the same for women and men.

What are the signs of Barrett’s esophagus?

There are no signs in particular of Barrett’s esophagus but there can be signs of the GERD that causes it. GERD can cause heartburn, belching, nausea, regurgitation, bitter taste in the mouth, abdominal discomfort and dry cough.

How is Barrett's esophagus diagnosed?

Barrett's esophagus is diagnosed by upper endoscopy with multiple biopsies. During endoscopy, a flexible tube with a camera on the end is passed through the mouth and down the esophagus into the stomach and duodenum, the first part of the small intestine. Upper endoscopy lets your provider look at the insides of these organs and find ulcers, abnormal growths, and other conditions like Barrett's esophagus. During endoscopy, multiple biopsies are taken and the tissue is looked at under a microscope to see changes in the cells of the mucosa that look like Barrett’s esophagus. Biopsies are also important to make sure that there is no cancer present. All biopsies should be examined by two or more pathologists, preferably at least one of whom is an expert in pathology of the esophagus.

How is Barrett’s esophagus staged?

The severity of Barrett's esophagus is described in two ways:

Dysplasia describes an abnormal appearance of cells under a microscope. More highly-abnormal cells are more likely to become cancer. Dysplasia can be either low-grade or high-grade, and exists on the following spectrum:

How is Barrett's esophagus treated?

Treatment in people with Barrett's esophagus is aimed at reducing acid reflux. This is often done by using medications. However, surgery and methods of endoscopic eradiation can also be used.

There are several medications that may be prescribed, such as proton pump inhibitors (eg. omeprazole, lansoprazole, pantoprazole, etc) and H2-blockers (eg. ranitidine). These medications work by lowering the amount of acid that is produced in the stomach. Generally, proton pump inhibitors are more effective than H2-blockers. In recent years, there has been interest in whether aspirin can reduce the risk of esophageal adenocarcinoma. At this time, aspirin and non-steroidal medications should not be routinely prescribed to patients with Barrett’s esophagus unless indicated as treatment for another medical condition.

There are also several anti-reflux surgeries, such as fundoplication, that can be done to control reflux. Unfortunately, there are no randomized, controlled studies that show that either acid suppression therapy or anti-reflux surgery reduces the risk of developing cancer of the esophagus. Therefore, the American College of Gastroenterology does not recommend anti-reflux surgery or high dose proton pump inhibitors for the prevention of adenocarcinoma of the esophagus – though these therapies can and should still be used to treat symptoms of chronic reflux.

In some cases, an esophagectomy may be done which is the removal of part or all of your esophagus. Your esophagus is then rebuilt using parts of your stomach or large intestine.

Patients receiving eradication therapy should be referred to a center that specializes in the treatment of esophageal and stomach cancer for possible treatment with surgical removal of the entire esophagus.

Barrett's Esophagus: Information from the National Institute of Diabetes and Digestive and Kidney Diseases (NIDDK).