How do healthy cells work?

What is a cell?

Cells are the most basic units of life. Each cell is a complex structure that could theoretically survive, grow, reproduce and die on its own. The cells in our bodies, however, work together with similar cells to form structures called tissues. Tissues make up the different organs and functional material in our bodies.

Each cell is composed of many smaller units called organelles. An organelle in a cell is analogous to an organ in the human body. Important organelles include: the plasma membrane, cytoplasm, cytoskeleton, golgi apparatus, endoplasmic reticulum, mitochondria, lysosomes, ribosomes, and the nucleus. The organelles each perform different functions to keep the cell alive and healthy. 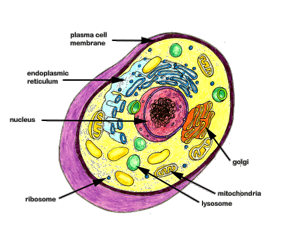 The cell with labeled organelles.
http://web.jjay.cuny.edu/~acarpi/NSC/13-cells.htm

The most important organelle is the nucleus. The nucleus is like the brain of a cell. It controls all actions that the cell undertakes. The nucleus can do this because it contains DNA. DNA is the genetic blueprint for the cell that contains all the necessary information for cells to live, grow, reproduce, and die. It is inherited from the cell's parent and is passed down to the daughter cell when it reproduces. DNA exists as a double-stranded helix made up of four randomly repeating nucleotides, which form a code that tells the cell how to produce all necessary proteins. 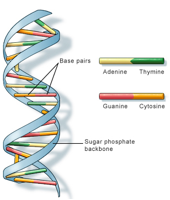 How are cells regulated?

The cell possesses enough genetic material to produce almost 100,000 different proteins, each with a different function. How does a cell know when to produce a protein and how much of it to produce? This is decided by a process called gene expression. Certain genes are expressed (meaning the code is read and used to make a protein) depending on signals from inside or outside the cell. For example, when a cell becomes too large, certain signals are produced to tell the nucleus to make proteins needed for cell division. The nucleus then expresses those specific genes. In this manner, cells regulate themselves and each other, maintaining balance and order in the body.

How do cells divide?

Cells grow and divide in a highly regulated system called the cell cycle. During most of the cell cycle, the cell grows at a normal pace and performs its normal functions. When a cell gets too large, the cell must divide. The process by which a cell divides in half to create two identical copies of itself is known as mitosis. The two new cells are called daughter cells. For this two occur, the DNA must replicate itself to provide a complete genome for each daughter cell. The organelles must also equally distribute themselves so each daughter cell receives an adequate amount to function. The cell must then physically divide, separating the contents of the cytoplasm into the two new cells. This process is highly regulated through gene expression. 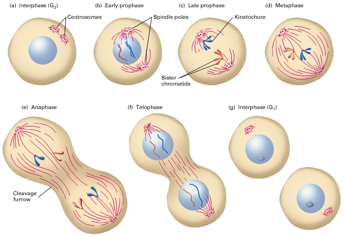 Biology of cells from Discovery Channel

How does cancer begin? »

A Dietitian’s Strange Affair with Sugar