Module 2: The Physics of Proton Therapy

Energy Loss of Charged Particles in Matter, the Bragg Peak, Distal Fall off and Range Uncertainties

One of the major advantages protons have over photons is the lack of exit dose. Shown below is a graph depicting the relative dose deposited in tissue for a variety of commonly used types of radiation therapy. One can see that after an area of build up the 22 mV photon beam reached its maximum dose (Dmax), after which the energy deposited with increasing depth gradually decreases (figure 1. IBA). 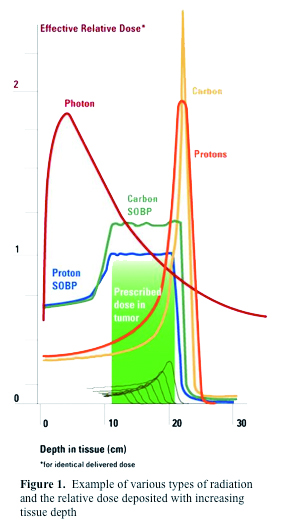 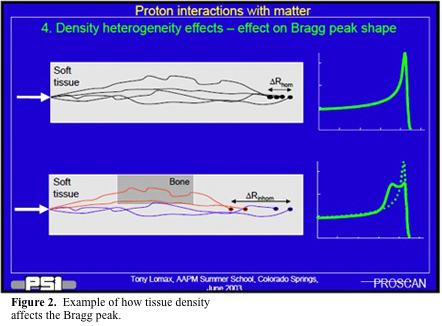 The width of the Bragg Peak is typically 8 mm for a 177 MeV proton beam. However, it is important to note that scatter can also affect the Bragg Peak. As a protons range in water increases, so does scatter, causing a broader Bragg Peak. Approximately 20% of the primary proton dose is lost through nuclear interactions with atomic nuclei.

However, it is important to note that the range of a proton beam is not absolute. Hence, the distal edge of a proton beam (representing the distal edge of the proton treatment field) caries some amount of uncertainty. This occurs because the energy loss due to ionization events seen with protons as they travel through tissue is a statistical phenomenon. This means that fluctuations would be expected, as there are going to be some protons which lose energy at a significantly different rate than the "average" proton. This results in a phenomenon known as "range straggling," in which protons that have the same starting and ending energies have different path lengths due to the above mentioned probability of differential energy loss. The effect of range straggling on the distal fall off of the Bragg peak is about 1.1% of the range of the beam. It is important to note that there is greater range straggling with passive scatter beams (to be discussed in module 3), as the scattering itself causes range straggling. It is also important to note that the density of the material that is traversed by the proton affects the Bragg peak as well (figure 2. Courtesy of Dr. Tony Lomax , PSI). This has important implications for treatment planning when dealing with tissue interfaces and organ motion, which can effect significantly the proton range. It is also important to remember that changes in the tumor during treatment will also effect the distal range, particularly in lung cancer treatment due to the differences in density of the path length of the protons. Additional range uncertainties can be caused by errors in converting the Hounsfield number (or CT number) to stopping power (which requires information regarding the type of particle, the energy of the particle and the properties of the material the particle is traveling through), which is required for proton dose calculations. An inaccuracy in convert CT number to stopping power can result in errors of up to 3 ½% of the range of the proton. Improvements in converting Hounsfield units to stopping power can reduce errors related to this conversion. One source of error when calculating stopping power is related to artifacts, such as hip prosthesis within the CT scan. Ways to reduce these artifacts can reduce errors related to Hounsfield conversion. Megavoltage CT scans can reduce artifacts and may help provide less error when CT number conversions are performed, however, they do suffer from worse resolution.

As the proton beam travels through matter, there are two main mechanisms by which energy is lost via Coulomb interactions. First, energy is lost through proton interaction with atomic electrons, which cause the limited range of protons in matter. The second cause of energy loss occurs when the proton interacts with the nucleus, which causes multiple proton scatter events. These scatter events cause the proton's path to deviate from a straight line (figure 3. Dr. Tony Lomax, PSI). Proton scatter affects the lateral margins of the beam (penumbra). Typically, 6 mV photons have a lateral fall off of 6 mm at 10 cm depth (dose from 80% ->20%) versus protons, which have a lateral fall off of 5-8 mm at 10 cm depth. Scatter is primarily due to multiple coulomb scattering, which also happens with electron therapy, but to a much lesser degree with protons. This scatter is generally insignificant at lesser depths, but the effect increases with depth. This contributes to the lateral dose distribution of the proton beam due to secondary particles that occur due to nuclear reactions. 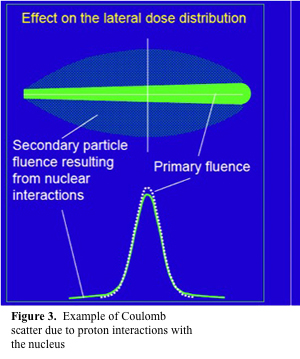 Hence, it is important to limit all other causes of multiple Coulomb scatter in order to keep the lateral penumbra as sharp as possible. To limit the amount of multiple Coulomb scatter due to equipment, the vacuum system in the beam line should be placed as downstream as possible. Additionally, monitoring devices should be made from the lightest material possible and be made as thin as possible. Any range modulation device should also be as upstream as possible to limit scatter as well. Additionally, the nozzle should be placed as close to the patient as possible to further decrease scatter. Generally, scanning beams are able to achieve a much sharper lateral penumbra by optimizing the energy of individual beam spots to limit penumbra.