The Physics of Proton Therapy

When radiation interacts with the tissues of the human body, it deposits energy that causes damage on a microscopic scale to atoms and molecules. The damage to DNA molecules leads to cell death and the killing of tumors. Unfortunately, it is not only tumor cells that are killed. There can also be damage to the normal tissue, which can cause organ damage.

In radiation therapy, a great deal of time is spent planning each treatment to make sure that the correct energy and dose is delivered to the tumor and that the dose to normal organs is minimized as much as possible.

Different types of radiation deposit their energy in tissues in different ways. The physics behind treatment planning is complex. The result is a depth difference in the dose deposition as the radiation enters and passes through the body. In proton therapy, these differences are used to maximize the dose to the tumor while minimizing the dose to the surrounding normal tissues.

The most common type of radiation used is x-ray beam therapy. When an x-ray beam enters the body, the chances of it interacting with a molecule and causing damage are high, but as the beam penetrates deeper, the chances of interaction are reduced. The interaction probability is random. Some x-rays will pass straight through the body without ever interacting. Energy deposition is so random, that if you were to make a graph to show the energy deposited as a function of the depth of penetration, it would have the form shown below. 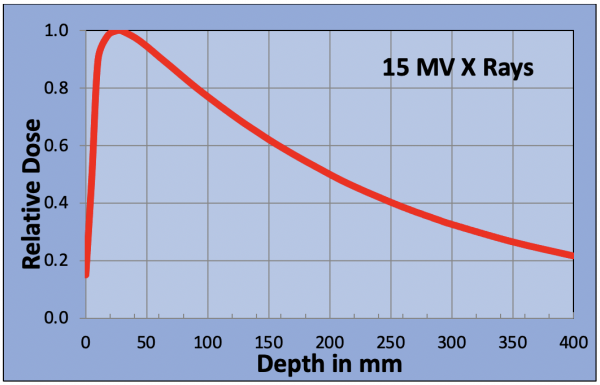 Some patients’ tumors may be situated deep in their body as the next figure shows. If the tumor is at a depth between 200 and 300 mm, then a single x-ray beam will only deliver between 35% and 50% of the maximum dose to the tumor. Higher doses will be delivered to the normal tissue in front of the tumor. To overcome this problem, x-ray beams are delivered from multiple angles to create a “hot spot” in the tumor. By carefully selecting the beam angles, the dose to major organs can be reduced to tolerable levels. 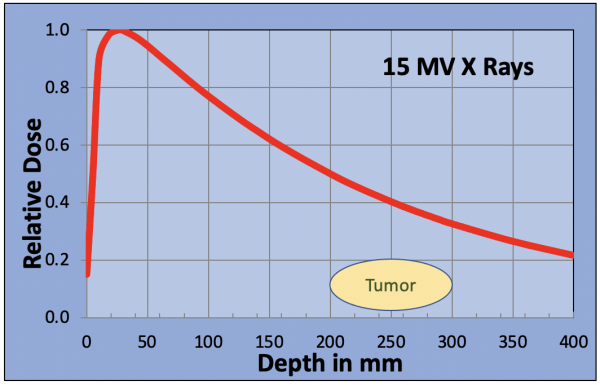 The physical processes by which protons lose energy when they pass through the body are quite different from those involved in x-ray therapy. These differences arise from the fact that protons are charged particles, unlike x-rays that are uncharged and behave more like waves than particles.

The protons are positively charged and as they pass through the body, they attract negatively charged electrons. This strips the electrons out of the nearby atoms and molecules in which they are attached. Each stripping process requires a small amount of energy, which must be supplied by the incident proton. An energetic proton entering the patient may be traveling at two-thirds the speed of light. Every time a proton strips an electron from a molecule it loses energy and slows down a little. It is traveling so fast that the number of interactions in each millimeter that it travels is relatively low, so the radiation dose is relatively low too. Eventually, after many million interactions, the proton will slow down completely and stop. At the end of its path, when it is moving slowly, the proton undergoes many more interactions in a millimeter than when it first entered the body. Therefore, the energy loss is much greater in the last 10-20 millimeters of its range. This causes the radiation dose to increase dramatically. This large dose spike at the end of the protons path is known as the Bragg peak. By changing the proton beam energy, we can move the Bragg peak to different depths within the patient. We now have a dose maximum at the position of the tumor. 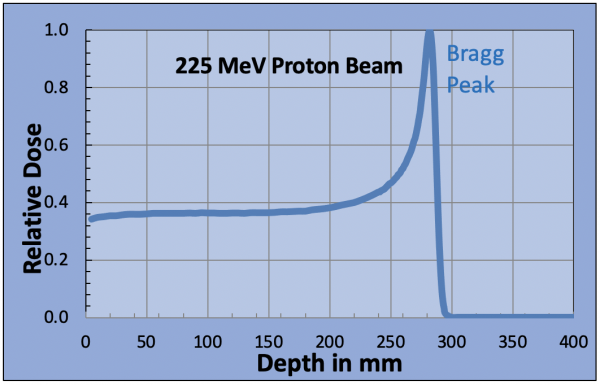 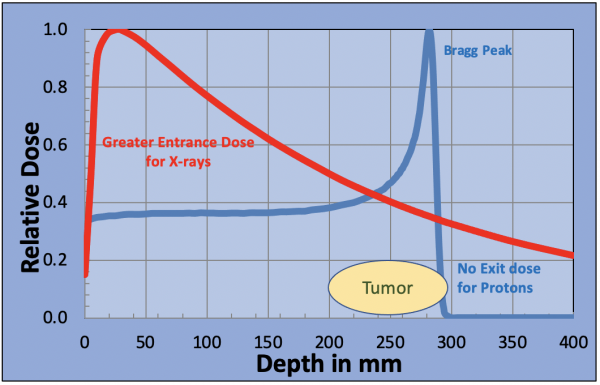 The entrance dose is greatly reduced for the proton beam, there is a sharp dose peak at the position of the tumor and the proton beam stops, reducing the exit dose to zero. In fact, the Bragg peak is too sharp. It is so narrow that it doesn’t cover the tumor. This can be overcome by adjusting the beam energy and applying multiple Bragg peaks to spread the dose across the tumor volume. This “Spread Out Bragg Peak” is produced by reducing the intensity of each Bragg peak as the energy is reduced, creating a uniform dose across the tumor volume. 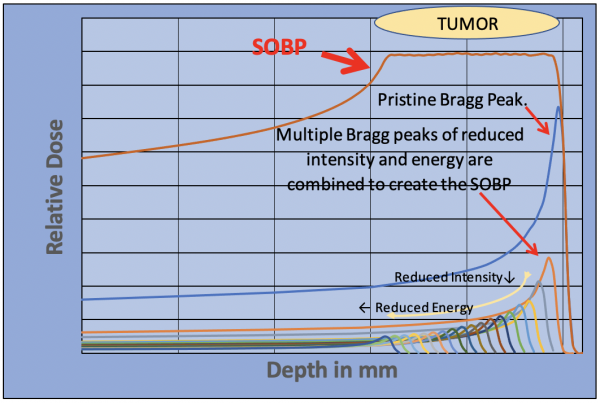