All About Proton Therapy

What is radiation therapy?

Radiation therapy uses high energy x-rays to damage the DNA of cells. This damage kills the cancer cells or at least stops them from reproducing. Radiation also damages normal cells, but because normal cells are growing more slowly, they can repair this radiation damage better than cancer cells. In order to give normal cells time to heal and to reduce a patient's side effects, radiation treatments are typically given in small daily doses, five days a week, over a 5-7 week period.

How is radiation therapy given?

Internal radiation therapy places the source of the high-energy rays inside the body, as close as possible to the cancer cells. This may be done by implanting "seeds" (small pieces of the radioactive substance) or by using an implanted reservoir, where a liquid radioactive substance is injected. This delivers very intense radiation to a small area of the body and limits the dose to normal tissue. Internal radiation therapy allows the doctor to give a higher total dose of radiation in a shorter time than is possible with external treatments. The radioactive substances used (also called the "radiation source") typically include radium, cesium, iodine, and phosphorus. Depending on the substance, the implant may be temporary or permanent, although the effect wears off over time in all cases. Depending on the type of radiation source, patients with radiation implants may need to be isolated from visitors for a period of time, so as not to expose others to radioactivity.

What is proton therapy and how is it different?

Radiation therapy given by a linear accelerator, including 3D conformal radiation and IMRT (intensity modulated radiation therapy), uses x-rays as the form of radiation. X-rays are a form of photon radiation. They use high-energy rays composed of photons (or "packets of energy") to target the cancer cells. Particle radiation is another type of radiation, which uses subatomic particles, including electrons, neutrons, and protons to generate a "particle beam" that kills the cancer cells. Proton therapy is one type of particle radiation.

The main difference between protons and X-rays is what makes up the proton beam itself. Protons are large particles with a positive charge that can enter tissue to a limited depth, based on the energy of the beam, and deposit most of their energy at the end of the beam. X-rays are electromagnetic waves that have no mass or charge and are able to penetrate completely through tissue while losing some energy along the way. In turn, x-rays enter the patient on one side of the body and travel straight through, exiting out the other side. The radiation dose gradually decreases as it travels through the tissues. In order to decrease the amount of radiation healthy tissues receive, the beam is given from several different angles, allowing the dose to accumulate in the intended target, but to affect surrounding healthy tissue less. This colorful picture shows an IMRT treatment plan for a prostate tumor, which utilizes 6 beams to get the maximum dose to the prostate (in red), while smaller doses (green and blue, which is the lowest dose) hit the surrounding tissues, as the beams enter and exit the body. 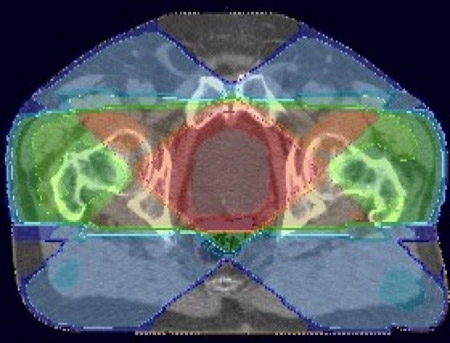 The proton beam is able to enter the body at a fairly low dose of radiation and increase in the last 3mm of the beam to the dose required for treatment. In addition, the beam then stops, resulting in virtually no radiation to the tissue beyond the target- or no "exit dose" as it is called. The ability of the proton dose to increase at a specified area is called the Bragg Peak. The depth of the Bragg Peak in tissue depends on the energy of the beam; the higher the energy, the deeper the Bragg Peak and therefore, the deeper the dose. This allows the radiation team to calculate the energy required to position the dose at the depth of the cancer and spare the healthy tissues surrounding it. 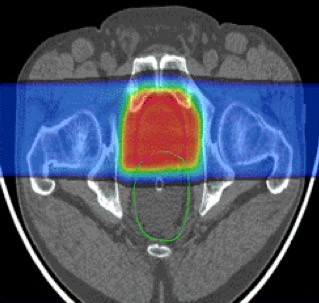 This ability to spare healthy tissue is the main difference between x-rays and protons. Research has shown that the biologic effect, or the damage to exposed tissues, is essentially the same for both therapies. This means the therapies will destroy tumor cells in the same manner, but protons should result in less toxicity to healthy tissues. This picture shows a prostate tumor treatment plan with proton therapy, using beams from 2 angles. The red area is the highest treatment dose (around the prostate), followed by yellow, green and blue being the lowest dose. 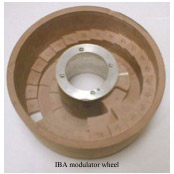 The Bragg Peak is just that, a peak, or spike, of energy that may only cover a few millimeters of tissue. Most tumors would not be confined to this peak, so a special wheel, called a modulator, is used to spread out the peak to the width of the target. This diagram shows the doses achieved by various radiation methods. You can see the protons (orange line) depicting the Bragg Peak, with the dose dropping off after the peak. The blue line represents the spread out proton beam (SOBP). You can see how the dose is "molded" around the tumor and how the dose drops off right after the target, sparing the tissues beyond it.

Examples of various different relative doses with respect to depth for a variety of photon energies, protons, and carbon ions.

The pictures below are an example of using proton therapy to treat a pediatric spinal cord tumor. The first image below is a treatment plan using x-rays, the second image is using proton therapy and the last is a side-to-side comparison, looking through the body from head to feet. The colors represent doses of radiation to that tissue, with purple being the most and green being the least. 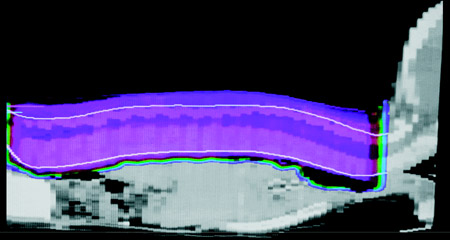 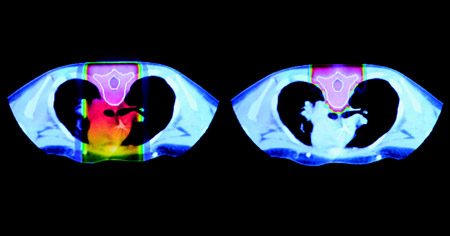 The History of Proton Therapy

Proton therapy has been used for quite some time. Cyclotron facilities that produced proton beams previously existed for physics research, but in 1946, Robert Wilson first proposed they be used for the treatment of cancer. He recognized the importance of the highly-localized use of energy as a way of increasing the dose to the tumor, while minimizing the dose to normal tissues. Two years later, researchers at the Lawrence Berkeley Laboratory (LBL) conducted extensive studies on protons and confirmed the predictions made by Wilson. The first treatments on humans consisted of radiation to destroy the pituitary gland in patients with hormone-sensitive metastatic breast cancer. This treatment successfully stopped the pituitary from making the hormones that stimulated the cancer cells to grow. In the 1950s, the treatments were effectively duplicated on patients at a facility in Uppsala, Sweden.

This led to the Harvard Cyclotron Facility using protons for medical treatments. They began treatment of the pituitary gland and developed specialized techniques for treating other conditions such as arteriovenous malformations (AVM). During the 1960s, these facilities worked to expand proton treatments to include choroidal melanomas, chondrosarcomas, chordomas, and various cancers located in the brain. However, this early work was limited due to the inability to perform 3-D imaging and being able to work only in facilities primarily dedicated to physics research.

The development of the CT scanner in the 1970s allowed for the treatment of almost any site in the body. The subsequent development of MRI, SPECT, and PET scanning has further improved the ability to define the target, allowing even further benefits to proton therapy.

In the 1980s design and construction began on the first dedicated clinical proton facility at Loma Linda University Medical Center in California. The Proton Therapy Cooperative Group (PTCOG) was also created during the 1980s for scientists to share ideas on the development of proton therapy. This group continues to meet on a regular basis to present both clinical and basic science research to the international proton therapy community.

Patients are now being treated with proton therapy worldwide. There are facilities operating in the U.S. with several facilities currently under construction or in the planning stages. Many experts argue that without clinical trials, the therapy is not proven to be superior to x-ray therapy. Some centers are making clinical trials a priority to help determine which cancers are best treated by protons.

Why aren't there more centers?

There are two issues that make the development of these centers difficult: size and cost. Each facility has a cyclotron or synchrotron accelerator to produce the beam, which weighs up to 200 tons. From the accelerator, the beam passes along a beam line, which can be 100 yards long. This beam line reaches all the gantries or fixed beam rooms, where patients are treated. The gantry itself is 3 stories tall, with the patient entering the treatment room on the second floor, so you can begin to imagine the scope and size of such a project. Many facilities need to locate the proton center many miles away from the main hospital because of the space that is required. Then there is the cost, which can be upwards of two hundred million dollars. This is obviously a limiting factor for cancer centers. Smaller, single room facilities are less expensive and require less space. These are becoming more common and will make this therapy available in more areas in the near future.

Proton therapy has been used for many years to treat patients with cancer. Clinical trials are critical to determining which diseases gain benefit in regard to survival, toxicity (both acute and long term) and quality of life.