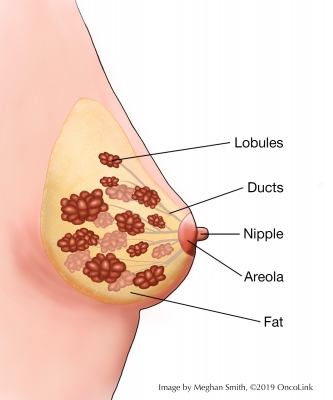 Breast cancer is caused by breast cells growing out of control. As the number of cells grow, they form a mass (tumor). There are many types of breast cancer, such as:

Breast cancer that has spread from the breast to some other part or parts of the body is called metastatic cancer.

There are some risks that may add to your chance of getting breast cancer such as:

Breast cancer also happens in men, though not as often as in women. Things that may add to risk for breast cancer in men are:

There are guidelines about when to start routine screening for breast cancer. These vary based on your age and health history. Screening is done with a mammogram, which is an x-ray of the breast. This test can find breast cancer when it is small. Finding breast cancer early may help patients live longer. Speak to your healthcare provider about the steps to take and when to start screening.

The early stages of breast cancer may not have any signs. As the mass grows, it can cause problems like:

When your healthcare provider finds something not normal in the breast, they will order some testing. These might be:

To guide treatment, breast cancer is "staged." The stage is based on:

Stage ranges from stage 0 (called carcinoma in situ) to stage IV (stage 4, when tumors have spread to other parts of the body). The stage and type of breast cancer will help your provider plan your treatment.

This article is a basic introduction to breast cancer. You can learn more about breast cancer and treatment by using the links below.

Centers for Disease Control. Breast Cancer: What screening tests are there? 28 August 2014. Found at: http://www.cdc.gov/cancer/breast/basic_info/screening.htm

Wishes for a New Year!

Building Your Fort of Support: Tips from a Breast Cancer Social Worker