What is a pathology report?

A pathologist is a doctor who specializes in diagnosing diseases. Pathologists look at tissue from the body that is removed during surgery or a biopsy. Samples of your breast tissue and lymph nodes will be sent to the pathology lab for review under a microscope. The pathologist writes up a summary report of their findings, which is called the pathology report.

What will you find on a pathology report?

The report is broken down into a few sections, such as:

In the case of breast cancer, the pathologist will describe:

Breast cancer pathology reports are complex and can seem overwhelming at first. To help you better understand your report, let's break down each section below.

The gross description describes what the pathologist received and sees with the naked eye. 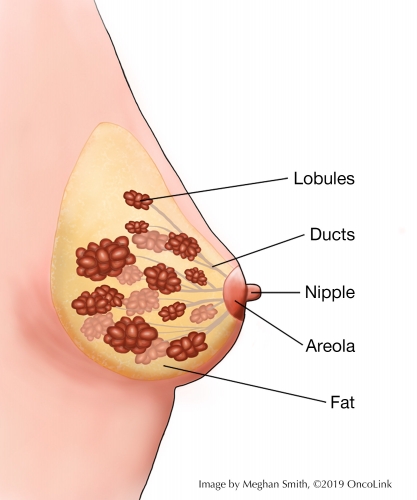 Almost all breast cancers start in glandular tissue, called adenocarcinomas (cancer of the glandular tissue). They are further named by where they start in the breast and how they look under the microscope. To better understand this section, you need to have some knowledge of normal breast tissue.

DCIS is the most common type of non-invasive breast cancer. It is sometimes called intraductal carcinoma. It is malignant (cancerous), and as it grows, the center of the tumor starts to die because it outgrows its blood supply. This area of dead tissue, called necrosis, can calcify (harden), which can be seen on a mammogram. DCIS tumors are further identified by how the cells appear under the microscope, classifying them into subtypes. These subtypes are: comedo, papillary, micropapillary, solid, and cribiform. Many tumors will be a mix of two or more subtypes. In general, all types of DCIS are treated similarly.

Cancer classified as LCIS doesn’t often have areas of necrosis or calcifications, so they are not easily seen on mammograms. LCIS is not considered a true cancer, rather an accumulation of abnormal cells in the lobule. It is considered a risk factor for developing breast cancer in the future in either breast. LCIS is often found incidentally (by chance) by the pathologist in a tissue specimen that was removed for another reason.

IDC is the most common type of invasive cancer, making up about 80% of cases. This tumor starts in the duct and spreads beyond the duct into normal breast tissue.

ILC is less common, making up about 10% of cases. This tumor starts in the lobule and spreads beyond the lobule into normal tissue.

Medullary carcinoma is rare, making up only 1-7% of all breast cancers. These cancers often have a well-defined boundary between the cancer cells and the normal cells. Of note, this type of cancer will not be given a histological grade by the pathologist (discussed below).

IBC is also rare, making up 1-5% of breast cancer cases. IBC presents differently than other types of breast cancer. Common symptoms include swelling or enlargement of one breast, reddened, warm to the touch, itchy and tender skin, and often without a lump. In some cases, the skin becomes thickened and dimpled, appearing like an orange peel, giving this sign the name "peau d'orange” (French for “skin of an orange”). IBC tends to be an aggressive form of breast cancer.

TC is a rare type of invasive breast cancer, making up about 2% of cases. Its name comes from the pathologist seeing a "tubular pattern" in 75% or more of the specimen. TC does not often spread (metastasize) to other areas of the body.

MC may also be called “colloid carcinoma.” MC is a slow-growing tumor. This tumor is also rare and is named for the mucin (protein and sugar compound) produced by and surrounding the tumor cells. These tumors rarely spread (metastasize) to other parts of the body.

The histological grade is reported using the "Bloom Richardson Scale" or "Nottingham Score.” It is a combination of nuclear grade, mitotic rate, and tubule formation, which describe what the tumor cells look like under a microscope. Histological grade predicts how aggressive the tumor cells are. This scoring system is detailed and often does not affect treatment decisions, so it is not especially useful for treatment options. However, you will see it on the report and may be interested in what it means. In general, high grade tumors are more likely to recur (come back) when compared to low grade tumors.

The three scores (nuclear grade, mitotic rate, and tubule formation) are then combined for a total score between 3 (1+1+1) and 9 (3+3+3). This score makes up the histological grade. You may see the three values and total score, or just the final grade.

The size of the tumor is listed in centimeters. 2 ½ centimeters is about 1 inch. It is not uncommon for the pathologist to find more tumor(s) in the specimen that you did not know were there. If many tumors are found, the size and location of each will be noted. Tumor locations are often based on the quadrant (area) it was found. Imagine the breast is divided with a "+" sign into 4 parts or quadrants. They are named upper inner quadrant (UIQ), upper outer quadrant (UOQ), lower outer quadrant (LOQ), and lower inner quadrant (LIQ). The breast tissue that is under the armpit is called the "axillary tail.”

Margins are the edges of the surgical cuts the surgeon made. The report will tell you how close the tumor comes to the edge. During cancer surgery, the surgeon tries to remove the whole tumor and some normal tissue around it. This area of "normal tissue" is important because cancer cells may be in this tissue too. If the edge (or margin) has part of the tumor, there may have been cancer cells left behind. The goal of surgery is to make a "clear margin,” that is, clear of any cancer cells. A "clean" or "clear" margin is when there are no tumor cells within 1-2 millimeters (depending on the pathologist) of the edge of the specimen. If the tumor cells are closer than this to the margin, more surgery or radiation may be needed.

When the pathologist examines the tumor and surrounding tissue in the specimen, they look at the tiny blood vessels and lymphatic drainage to see if there are any tumor cells in them. This is different from the lymph nodes and is reported as whether or not lymphatic or vascular invasion is seen. If there are tumor cells in the small blood vessels or in the lymphatic drainage, it may be a sign of a more aggressive tumor.

The lymph system is the "housekeeping system" of the body. It is a network of vessels (tubes) that connect lymph nodes. These nodes can vary in size but are often up to about 2 centimeters wide. They have cells that clear bacteria and other foreign debris from the body. Lymph is a watery liquid that flows between cells in the body, picking up things that shouldn’t be in your body and moving it into the lymph node for filtering. This waste leaves the body through the liver.

Cancer cells use the lymph system as a first step to traveling to other areas of the body. During a breast cancer surgery, lymph nodes are removed and checked for the presence of cancer cells. This will be reported as the number of lymph nodes that contained cancer cells and how many were examined. For example, the report might state "ten benign lymph nodes (0/10)" (no cancer seen) or "tumor seen in ten of twelve lymph nodes (10/12)."

There are high numbers of hormone receptors for estrogen and progesterone in some breast cancers. These tumors need hormones to grow. These tumors are known as hormone receptor-positive, ER+/PR+, ER+/PR- or ER-/PR+. ER stands for “estrogen receptor” and PR stands for “progesterone receptor.” Estrogen and progesterone are both hormones. The receptors are on the cancer cells and when the hormone attaches to the receptor, the cancer cell can grow and divide. Hormone therapy can be used to interfere with these receptors, slowing or stopping tumor growth or preventing recurrence (cancer coming back).

There is no standard for reporting the receptor status, so you may see any of these:

In the case of just a positive or negative result, the percentage should be requested. This is because research has shown that even tumors with very low positivity can benefit from hormone therapy, yet some labs report low results (<10%) as negative. Therefore, the only true negative is a result that is zero percent of receptors positive.

The Her-2/neu gene revs up the production of a protein found on the surface of breast cancer cells that tells the cells to grow and divide. In about 10-20% of breast cancers, there are too many copies of the gene, or the protein is overexpressed on the cell surface. This causes the cancer to grow faster and be more aggressive. Breast tumors are often tested, by one of two available tests, to see if they have too many copies of the gene or overexpress the protein:

Patients with a +2 (borderline) result on IHC, should also have the FISH test done to clarify the borderline result as positive or negative. Her 2 positive tumors may be treated with medications, called monoclonal antibodies, targeting the Her 2 protein.

Stage of the Tumor

The staging system most used for breast cancers is the American Joint Committee on Cancer (AJCC) staging system. This system utilizes the extent of the primary tumor (Tis-4), the absence or presence of cancer in the lymph nodes (N0-3), and the existence of metastasis (M0 or 1) to assign a TNM rating, which corresponds to a stage.

Putting it All Together

Some pieces of the report are used to figure out the stage of the cancer. Most parts of the report play a role in deciding what treatment is needed. By understanding the basics of the report, you will be better able to talk about your treatment options with your healthcare team.

Park I et al. Comparison of the Characteristics of Medullary Breast Carcinoma and Invasive Ductal Carcinoma. Journal of Breast Cancer. 2013. 16(4):417-425.