Colorectal cancer is the third most commonly diagnosed cancer in the United States. There will be an estimated 145,600 new cases in the United States every year. Approximately 10 to 15% of these cancers may be caused by genetic abnormalities that run in families. There are two major types of known hereditary disorders: familial adenomatous polyposis (also known as FAP) and hereditary nonpolyposis colorectal cancer (also known as HNPCC). In this article, we will address FAP.

FAP is very rare. It accounts for less than one percent of new colorectal cancer cases each year. Estimates of the incidence of FAP vary from 1 case in 7,000 persons to 1 case in 22,000 persons. The average onset of polyps in patients with FAP is age 16. Affected patients can develop hundreds to thousands of adenomatous polyps. People with FAP have a 100% chance of developing colorectal cancer by age 40 if they do not have their colon removed.

Adenomatous polyps are considered to be "pre-cancerous" lesions, some of which will eventually progress to cancer. Therefore, the more polyps an individual has, the greater his or her chance of developing cancer. The average age of colorectal cancer diagnosis in FAP is 39 years, as compared to 72 years in the general population. 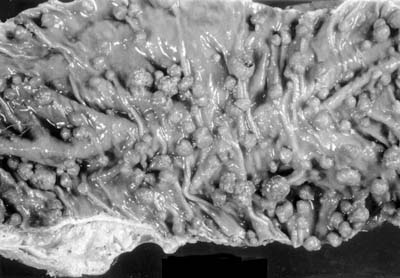 Several other cancers have been associated with FAP, including periampullary and thyroid cancer. Periampullary (cancer that is found in the area where the bile duct and pancreas empty into the small bowel) is the second most common cancer in FAP and accounts for 1 in 5 deaths of these patients. In addition, several other non-cancerous manifestations have been seen in FAP. Young FAP patients may develop cysts in the skin on the face, scalp, arms, and legs, often years before they develop colon polyps. Congenital hypertrophy of the retinal pigment epithelium (also called CHRPE) is an abnormality found in the retina of the eye that looks like a freckle and causes no symptoms for the patient. While CHRPE can be seen in one eye of individuals without FAP, but it is often present in both eyes in a FAP patient. About 70% of FAP patients have dental abnormalities, including extra or missing teeth, fused roots, or non-cancerous tumors of the jaw bone (osteomas). Although these manifestations are not harmful to the patient, they may be the first sign of FAP and prompt a patient to undergo testing for FAP.

Ten to twenty percent of FAP patients will develop desmoid tumors, which are non-cancerous, slow-growing tumors that occur in the abdominal area. Despite the fact that these tumors are not cancerous, they can cause significant damage by surrounding, compressing, and eroding nearby structures, and may need to be removed surgically. In the past, the term "Gardner's Syndrome" was used to describe a subset of FAP patients that have CHRPE, dental abnormalities, or desmoid tumors, and was thought to be genetically different. It is now known that these features are seen in many FAP patients and these cases are not genetically different. 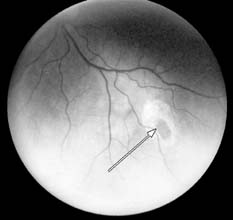 In 1991, the gene responsible for FAP was discovered and was named the Adenomatous Polyposis Coli, or APC gene. Scientists have discovered over 300 different mutations in the APC gene which can cause FAP. The location of the mutation on the gene often correlates with the number of polyps, age of onset, and other manifestations. FAP is an autosomal dominant inherited disorder, meaning that a child of an affected parent has a 50% chance of inheriting the mutation. Approximately 30% of FAP cases are "de novo mutations," meaning they have no prior family history of the mutation.

Genetic testing is something that should not be taken lightly. One must consider the effect of the test results on themselves and other family members. Concerns may include the implication of a positive or negative test, passing the gene on to children, and discrimination in employment and insurance matters. A genetic counselor should meet with anyone wishing to undergo testing, both before testing and after the results are known. These professionals are trained to help patients understand the risks and benefits of testing and what to do with the results.

There is no medication to prevent the development of colon polyps in FAP. However, aspirin and some non-steroidal anti-inflammatory drugs (NSAIDs such as sulindac and indomethacin) have been shown to shrink or reduce polyp development in these patients. A recent clinical trial examined the benefits of a targeted therapy medication, erlotinib in combination with sulindac. Clinical trials are currently examining ways to prevent polyp growth in these patients.

Until better medical therapies are developed, individuals with FAP require surgical removal of their colon to prevent the development of colon cancer. This surgery is often performed between the ages of 17 and 20 in asymptomatic members of FAP families. There are several surgical options for these patients, but the goal is to remove all colorectal tissue at risk for developing polyps and maintain normal bowel evacuation through the anus.

FAP is one of the most well understood inherited cancer syndromes. This knowledge has led to the availability of genetic testing for at-risk individuals, improved screening and surgical management, and clinical trials for the prevention of polyp formation. Continued research into FAP will lead to better treatments for these families and may have implications for all colon cancer patients.

Find a genetic counselor in your area.

Changes to Colorectal Cancer Screening Guidelines: What You Need to Know