Module 1: An Introduction to Proton Therapy

Robert Wilson first proposed the use of protons for the treatment of cancer in a scientific article in 1946. He recognized the importance of highly localized deposition of energy as a way of increasing the dose to the tumor while minimizing the dose to normal tissues. Two years later, researchers at the Lawrence Berkeley Laboratory (LBL) conducted extensive studies on protons and confirmed the predictions made by Wilson. The first treatments on humans consisted of irradiation to destroy the pituitary gland in patients with metastatic breast cancer that was hormone-sensitive. This treatment stopped the pituitary from making hormones that stimulated the cancer cells to grow. The pituitary was a natural site for the first treatments because the gland's location was easily identified on standard X-ray films, was well localized, and was surrounded by sensitive normal structures. In the 1950s, the treatments were successfully duplicated on patients at the facility in Uppsala, Sweden.

The Harvard Cyclotron Facility became interested in using protons for medical treatments after observing proton therapy in the 1950s at both LBL and Uppsala. The Harvard Cyclotron subsequently began treatment of the pituitary gland and developed specialized techniques for treating other lesions such as arteriovenous malformations (AVM). During the 1960s, these facilities worked to expand proton treatments to include choroidal melanomas, chondrosarcomas, chordomas, and various intracranial malignancies. However, this early work was limited due to the inability to perform 3-D imaging and reliance on facilities primarily dedicated to physics research.

With the development of the CT scanner, improved target definition allowed for the treatment of almost any site in the body. During the 1970s, the Massachusetts General Hospital conducted the first research on mixed proton/X-ray radiotherapy for the treatment of prostate cancer. Unfortunately, during this decade, the role of protons in radiotherapy was significantly underestimated in favor of neutron therapy. However, proton therapy survived this time of limited acknowledgment and interest in this therapy is rapidly increasing. The subsequent development of MRI, SPECT, and PET scanning has further improved target definition and allows even further benefits of proton therapy.

In the 1980s design and construction began on the first dedicated clinical proton facility at Loma Linda University Medical Center. This facility was designed and built by Fermilab, where Wilson was the founding director. To date, the Loma Linda facility has treated over 19,000 patients with proton therapy (Ref: PTCOG website). The Proton Therapy Cooperative Group (PTCOG) was also created during the 1980s for scientists to exchange ideas on the development of proton therapy. This group continues to meet on a regular basis to present both clinical and basic science research to the international proton therapy community.

Proton therapy was further expanded during the 1990s. The Proton Radiation Oncology Group (PROG) was created specifically to sponsor the development of clinical trials involving proton therapy. Over 130,000 patients have now been treated with proton therapy worldwide. A number of facilities have opened in the last 10 years and others are in the planning stages (Ref: PTCOG website). Manufacturers are developing smaller, single room facilities with the hopes of bringing proton therapy to more communities.

How is it Similar to Photon Therapy?

The main difference between protons and X-rays is based on the physical properties of the beam itself. Protons are large particles with a positive charge that penetrate matter to a finite depth based on the energy of the beam. X-rays are electromagnetic waves that have no mass or charge and are able to penetrate completely through tissue while losing some energy. These physical properties have a significant bearing on the treatment of patients.

The depth of treatment in tissue for protons is related to a quantity known as the Bragg Peak. This is due to a buildup of dose in the final few millimeters of the proton range. The depth of the Bragg Peak is dependent on the energy of the beam; with increasing energy, the Bragg Peak is located deeper in tissue. Figure 1. (Courtesy of Dr. Jim McDonough) shows the Bragg Peak. As you can see, the entrance dose is relatively low, but as the beam penetrates deeper in tissue, there is a sharp rise in dose deposited. This is followed by a rapid stop in dose deposition. The beam stops at this point. Thus no tissue is treated beyond the Bragg Peak. This peak needs to be "spread out" to fit the width of the target to be clinically useful. Thus a special wheel, called a modulator is placed in the beam to spread out the Bragg Peak to the desired size. Figure 2. (Courtesy of Dr. Jim McDonough lecture) shows a spread out Bragg Peak. Figure 3. (IBA) shows the relationship between an unmodulated Bragg Peak, modulated spread out Bragg Peak, and standard X-rays. 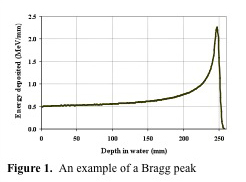 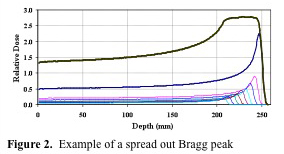 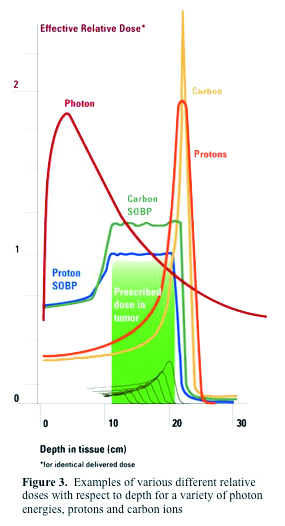 How are Protons Different from Photons?

Proton beams offer highly significant advantages over X-rays in the sparing of normal tissues. This is due to the physical characteristics of the proton beam compared to X-rays. X-rays are electromagnetic waves and are highly penetrating, and will deliver dose throughout any volume of tissue irradiated, regardless of thickness. Thus x-rays always deliver substantial doses of irradiation both anterior and posterior to any tumor volume. Furthermore even for the most energetic X-ray beams available for practice, the depth at which the maximum dose of radiation is delivered (Dmax) ranges from as little 0.5 cm to a maximum of 3 cm depending on the energy utilized. Because a tumor is almost always located deeper than these ranges, a higher dose is invariably delivered to the normal tissues anterior to the tumor, and the tumor is always treated in the region of the beam where the energy deposition is falling off. To some extent this can be overcome by bringing in beams from multiple directions, centered on the tumor, allowing the dose to sum within the tumor volume. However, since the beam travels throughout the entire thickness of the body, all normal tissues from the entrance area to the exit of the beam will be affected.

A number of published studies have documented the clinical advantages of proton beams, and shown decreased normal tissue toxicity, compared to conventional photons (X-rays). By limiting the dose to normal structures, higher doses can safely be delivered to the tumor itself. This should result in higher local control and ultimately increased survival while minimizing side effects of therapy.

Why aren't there more centers?

There is significant capital cost and operational costs in establishing and maintaining a proton therapy facility. The proton therapy centers that are currently operational in America, including machines manufactured by IBA and Hitachi, are priced between $80 and $120+ million. They require large facilities, which can make it difficult to build a center into an existing cancer center. There are proposals for smaller, less costly alternatives, but none have been constructed to date. At present the tremendous cost of these facilities has limited the wide spread adaptation of proton technology and this therapy may remain a scarce resource for the foreseeable future. However, with newer, more affordable technologies in development, there is the potential for a more rapid expansion of this technology in the future.

It is estimated that approximately 1.6 million patients are diagnosed with cancer in the United States annually. Of these patients, it is estimated that approximately 60% of these patients will receive radiation therapy. Proton therapy has numerous theoretical benefits. There is the potential for greater tumor conformality with decreased dose to normal tissues. This may increase the therapeutic index, decreasing toxicity. It may also allow radiation dose escalation and hypofractionation with shorter radiation treatment courses. The largest benefit may be the ability to combine proton therapy with chemotherapy, which has proven difficult and toxic when combined with conventional radiation. This benefit is due to the physical characteristics of a proton beam with decreased normal tissue exposure to the radiation therapy.

In order to demonstrate the benefit of protons compared with photon-based therapy, the proton community is committed to performing cooperative clinical trials. These trials will help determine which cancer types derive the greatest benefit from proton treatment and better characterize the acute and long term effects of this treatment. It is through clinical trials that the radiation community will learn how this tool best fits in the cancer treatment toolbox.